The silence inside a makeshift cinema in the heart of Kyiv was shattered with the crash of a windowpane. Fireworks flashed. Homophobic attackers were attempting to besiege the screening of a film about the lives of LGBTQ people. The assailants threw tear gas and pyrotechnics. A member of the audience jumped up onto the windowsill and began throwing the projectiles back onto the street — shocking the men outside, who quickly ran away.

That man was Viktor Pylypenko, a former member of the Ukrainian army’s anti-terror detail in Donbass and the founder of a federation for equal rights for LGBTQ communities. Now a trim 34-year-old sporting a hoodie and earrings like a proper big-city hipster, Pylypenko was a volunteer in the Donbass Battalion during intense fighting against separatists in eastern Ukraine from 2014 to 2016. On the front, comrades called him the “Frenchman,” on account of his work as a trained translator of English and French.

In the summer of 2018, Pylypenko became the first Ukrainian soldier to publicly declare his homosexuality. “It was scary of course, like stepping into the unknown,” he said. Pylypenko had kept the fact that he liked men to himself, not telling the soldiers with whom he shared the trenches.

“It was a constant game of hide-and-seek,” Pylypenko said. “I slept with women so no one would think I was gay.” His comrades sometimes brought their wives and children to the barracks to introduce them to everyone. “Something like that is simply impossible for gay and lesbian soldiers,” he said.

After coming out, Pylypenko felt empowered to approach dozens of gay, lesbian and transgender active-duty soldiers and veterans. In 2019, about 30 of them formed an advocacy group for LGBTQ service people and participated in Kyiv’s March for Equality for the first time.

Today, the group has more than 100 members — and it’s growing. “In some units, they may talk about LGBTQ rights in the military on their smoke break,” Pylypenko said. “Afterwards, somebody will Google our group and get in touch.” 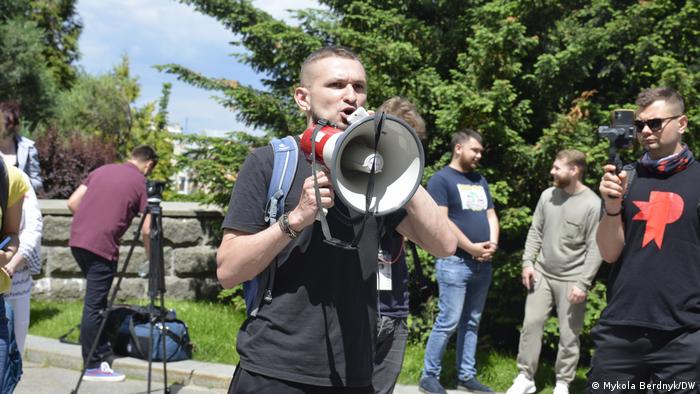 One of those people is Serhiy Afanasiev, a 23-year-old special forces soldier, who recently came out on social media. He was encouraged to do so by comrades in the LGBTQ group. Afanasiev said he was relieved that he no longer had to live a double life. Comrades on the front lines were accepting: “I have a good commander. He told me it’s my life and he has no right to get involved. I serve well, and that is enough for him.”

A soldier from another unit said she had decided not to come out yet.”Only a very few people that I really trust know that I am bisexual,” said the soldier, who asked that her name not be used. “Unfortunately, there is still a lot of superstition around the topic in society. But I am planning my coming out soon. I guess then I’ll have to clean up my ‘friends’ lists.”

Pylypenko said the ways in which comrades might react to a soldier’s coming out depend a lot on the unit and its commander. When he came out, he said, he was subjected to verbal abuse on social media. Most of his colleagues, however, voiced support: “especially those with whom I fought against the enemy, with those I saved the wounded with.”

Nevertheless, in 2019, at a memorial service commemorating the Battle of Ilovaisk, Pylypenko was physically assaulted by a former comrade. “I had bruises on my back and my face,” he said. “I didn’t defend myself but instead tried to calm him with reason.” 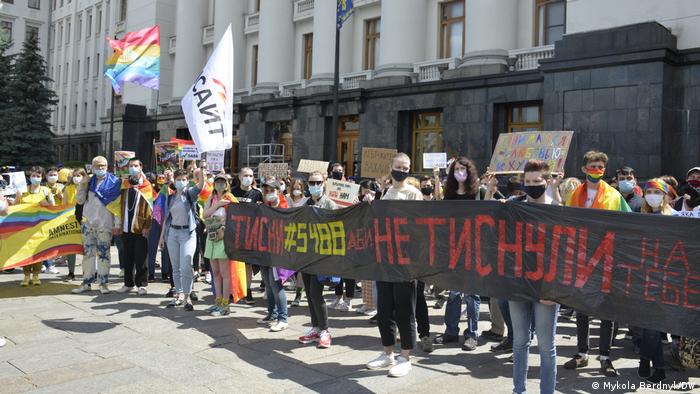 On June 5, LGBTQ+ groups demonstrated in front the the Verkhovna Rada in Kyiv

Like other LGBTQ people, queer soldiers don’t necessarily feel safe on the streets. Even though police have increased their presence at LGBTQ events since anti-gay assailants injured 10 people when they attacked the March for Equality in 2015, homophobic gangs often go on “safaris” in which “small groups chase LGBTQ activists — often those sporting brightly colored hair or rainbow symbols — through the city,” Pylypenko said.

LGBTQ soldiers have not reacted with violence. “There have been times when people have told me I need to hit back,” Pylypenko said. “But I shut them down. Because, if you react with physical violence, you justify the violence being used against you.” He said LGBTQ communities should take a stand against violence, but not with fists, and most certainly not with weapons.

The most powerful weapon LGTBQ soldiers have in their arsenal is public relations. Like other advocacy groups, they are fighting for civil partnerships, the same-sex marriage alternative found in many countries but still illegal in Ukraine.

Pylypenko said civil partnerships were especially important for soldiers who risked their lives every day lines in Donbass, as well as for veterans who could be called up again if the situation escalates. Ukrainian law does not treat the partners of LGBTQ members of the military as it does the spouses and children of heterosexual soldiers wounded or killed in combat. “When a gay or lesbian soldier dies,” he said, “their family is essentially cut off.”

There are several legislative proposals for civil partnerships, yet none of them has made it to the parliament for debate. “The war has been going on for eight years now, and the risks remain the same,” Pylypenko. “Give us equality: We have sworn loyalty to the Ukrainian people. We have bled for our country: We have earned the right to equality.”

Advocates for LGBTQ communities say the soldiers’ work has begun to shift views in society. Ukrainians see the military and veterans as defenders of their homeland, and the army enjoys more public trust than any other institution in the country. 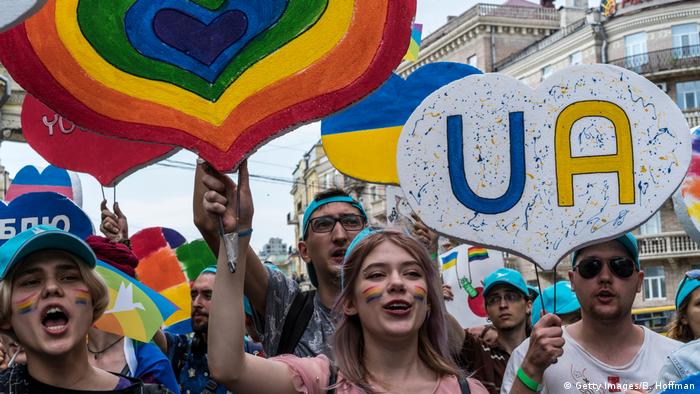 In March, Pylypenko’s group invited LGBTQ people to join a new unit within the Ukrainian army. The impetus for forming a subunit tasked with creating a more psychologically pleasant atmosphere for queer soldiers in the army came from a commander who belongs to an LGBTQ group himself.

The idea was not run past army leadership, and the name of the unit remains secret. “There could homophobes in the military command who simply wouldn’t allow such a unit to exist,” Pylypenko said.

Recruiting has been slow. People who wish to join the unit must be physically and mentally fit for the challenge, and not everyone is cut out for it. Secondly, Pylypenko said, recruits have reconsidered after allegations by homophobic groups that LGBTQ advocates have collaborated with Russia to discredit the Ukrainian army.

“One of our aims is to expose the lies of Russian propaganda myths that claim Ukraine is being ruled by a ‘neo-Nazi junta,'” Pylypenko said. “How could there be talk of neo-Nazis in an army that has gay-friendly units, and in which gay and lesbian active-duty and veteran service members can come out without fear?”

“Why should we look to Russia?” Pylypenko said. “We were part of that empire. Why should we have to listen to them trash the Ukrainian military and the LGBTQ community? We must look to the free world, to Europe. We must aspire to democratic values.”

Difference between a journalist and an opinion writer