Sunday’s election of a new coalition government in Israel, by a wafer-thin 60-59 votes, does not mark a dramatic ideological shift, even though its eight constituent parties span the political spectrum.

The Knesset that Israel’s voters chose on March 23 has a clear right-wing majority. And if Benjamin Netanyahu had stepped aside in the past few weeks, his would-be Likud successor Nir Barkat correctly noted in an interview on Saturday night, that right-wing Knesset majority would have seen a right-wing coalition retaining power.

What the change in government does mark, however, is a crucial reaffirmation of Israel’s democratic process, achieved despite the Netanyahu-promoted climate of demonization, the charges of treachery leveled at some of the new coalition’s members, the threats of violence.

Netanyahu and his loyalists have branded his ouster as illegitimate — the greatest fraud in the history of Israel and world democracy, according to Netanyahu himself. Numerous MKs now heading into the opposition reiterated this charge during their heckling throughout Naftali Bennett’s speech in the Knesset Sunday; their orchestrated spite, and Netanyahu’s own long, dishonorable and derisive address, stood in dispiriting contrast to the incoming prime minister’s effort to talk of conciliation.

The change of government is, of course, neither fraudulent nor illegitimate. It properly reflects, rather, the composition of a narrow parliamentary majority unified in the belief that ending Netanyahu’s 12-year hold on power was, as New Hope’s Gideon Sa’ar put it during the election campaign, Israel’s most urgent political need.

The name ‘Benjamin Netanyahu’ and the title ‘prime minister’ had become almost synonymous in Israel. A young generation has grown up here that has never known another prime minister

The name “Benjamin Netanyahu” and the title “prime minister” had become almost synonymous in Israel. A young generation has grown up here that has never known another prime minister.

The record-breaking prime minister has utilized a formidable array of skills to retain power legitimately for (the statisticians tell us) 4,457 days since 2009. And now his opponents have mustered theirs to legitimately consign him to the opposition benches.

A coalition of consensus or collapse

Newly voted into office, this wildly implausible coalition is already being written off by some analysts as inevitably short-lived, with a single MK here or there capable of derailing its every move. The abstention in Sunday’s confidence vote of Ra’am MK Said al-Harumi, reducing the anticipated majority from 61-59 to 60-59, underlined its fragility.

Netanyahu — who declared Sunday that it does not deserve to lead Israel for so much as a day, and that “in Iran, they’re celebrating” its arrival — promised to bring it down “faster than you think.” His longtime ultra-Orthodox political partners, who seem to have convinced themselves that their not being in government is a breach of divine will, are vowing to help him do so.

But Netanyahu is the glue that holds the new coalition together. The more determinedly he battles to regain power, the more he unifies his otherwise unthinkable mix of governing adversaries. 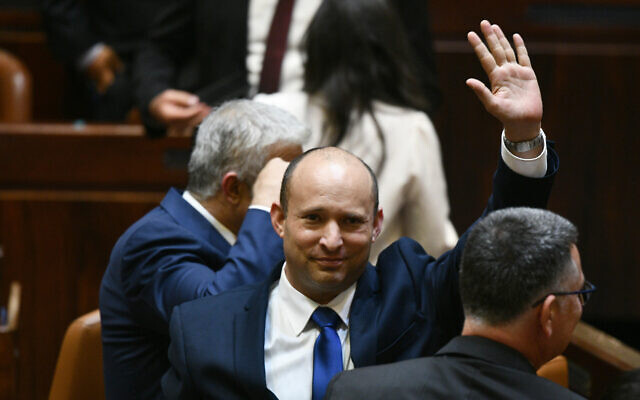 Since they can only survive if they all work together, however, the least ideologically cohesive government in the history of Israel must, by definition, function via consensus. This will limit its capacity for advancing divisive policies and legislation, and force it to focus on matters of genuinely wide benefit. After two years of political paralysis and dysfunctional government, there is plenty of scope.

The document guiding the new coalition, its list of “key principles,” necessarily deals with precisely such areas of consensus — investigating the Meron disaster , building hospitals and airports, tackling crime in the Arab sector, working to lower housing costs, and numerous other such issues that any competent Israeli government should have long since prioritized. There is an opportunity here, too, to step up the neglected fight against the blight of financial corruption, including by bolstering police and state prosecution resources. Likewise, the new government is committed to quickly passing a state budget — rectifying the atrocious situation whereby, because of Netanyahu’s maneuverings, Israel has functioned without an updated budget since the end of 2019.

The new coalition can only be a government of national healing. Otherwise, it will not be a government at all. In coming together, the leaders of Yesh Atid, Yamina, Blue and White, Yisrael Beytenu, Labor, New Hope, Meretz, and Ra’am have publicly recognized that many of their own ideological goals will have to be put aside in the wider cause of coalition consensus. If that recognition fades, so too will the coalition’s alliances. “What we agree on, we’ll take forward,” said Bennett in his Sunday speech. “What we differ on, we’ll put aside for now.”

Bennett himself failed to win enough votes even to make it into the Knesset as recently as two years ago; he wasn’t able to keep his small Yamina party united behind him as he pushed for this coalition in recent weeks; he flipped and flopped about partnering, or not partnering, with Netanyahu. None of this inspires great confidence in the man now ultimately responsible for the dependable decision-making essential to keeping Israel secure.

The potential for crisis is immediate and diverse. A highly controversial “flag march” is planned for Jerusalem on Tuesday. Hamas is issuing threats. The Sheikh Jarrah evictions in East Jerusalem are a ticking time bomb. Israel’s enemies will be looking for ways to test the new leadership; Israel’s friends will be warily watching how it copes. 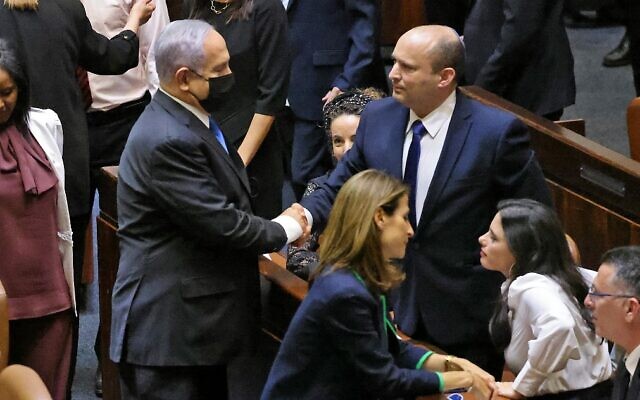 (L to R) Israel’s outgoing prime minister Benjamin Netanyahu shakes hands with his successor, incoming Prime Minister Naftali Bennett, after a special session to vote on a new government at the Knesset in Jerusalem, on June 13, 2021. (EMMANUEL DUNAND / AFP)

But then such challenges are the common test for all new, and by definition, untried governments. One of the reasons Netanyahu became so hard to dislodge was the public’s knowledge that whoever succeeded him would be less experienced, less well-connected, less familiar with the minefields of safeguarding Israel, inside and out. Remarkably, such concerns were ultimately outweighed for 60 MKs from eight parties, brought together less by Bennett than by the man who intends to succeed him on August 27, 2023, Yesh Atid’s Yair Lapid.

And thus Israel’s capacity to change its leadership, via a bitter, unedifying, but ultimately orderly transfer of power, was demonstrated afresh on Sunday, reaffirmed after 12 years. If this new coalition does nothing else, that in itself is a vital and extraordinary achievement.

Cuomo Signs Law Allowing Transgender To Change their sex on their...

Pro-Life November 30, 2022
The title of the page
Go to mobile version