The Ever Given, a 400-meter (1,300-foot) container ship got stranded in Egypt’s Suez Canal on Tuesday and has since been blocking the vital maritime passageway between Asia and Europe.

The suspension of traffic through the narrow channel has deepened problems for world trade already disrupted by the coronavirus pandemic.

Dozens of ships — including several oil tankers — are now waiting either side of the canal, according to Refinitiv shipping data, while several others have been rerouted. That is likely to add up to 15 days to their journey.

On Friday, the Reuters news agency reported that efforts to free the ship had failed and may now take several more weeks. Unstable weather conditions may further complicate the dredging of sand from around the vessel.

The blockage could cost global trade $6-10 billion (€5-8.5 billion) a week, a study by German insurer Allianz suggested. The cost of shipping oil products, for example, has already doubled and delays to the global manufacturing supply chain, especially the auto industry, could hit consumers.

However, Suez is not the most vulnerable bottleneck for world trade. DW looks at the four chokepoints that a strong post-COVID economic recovery relies on. 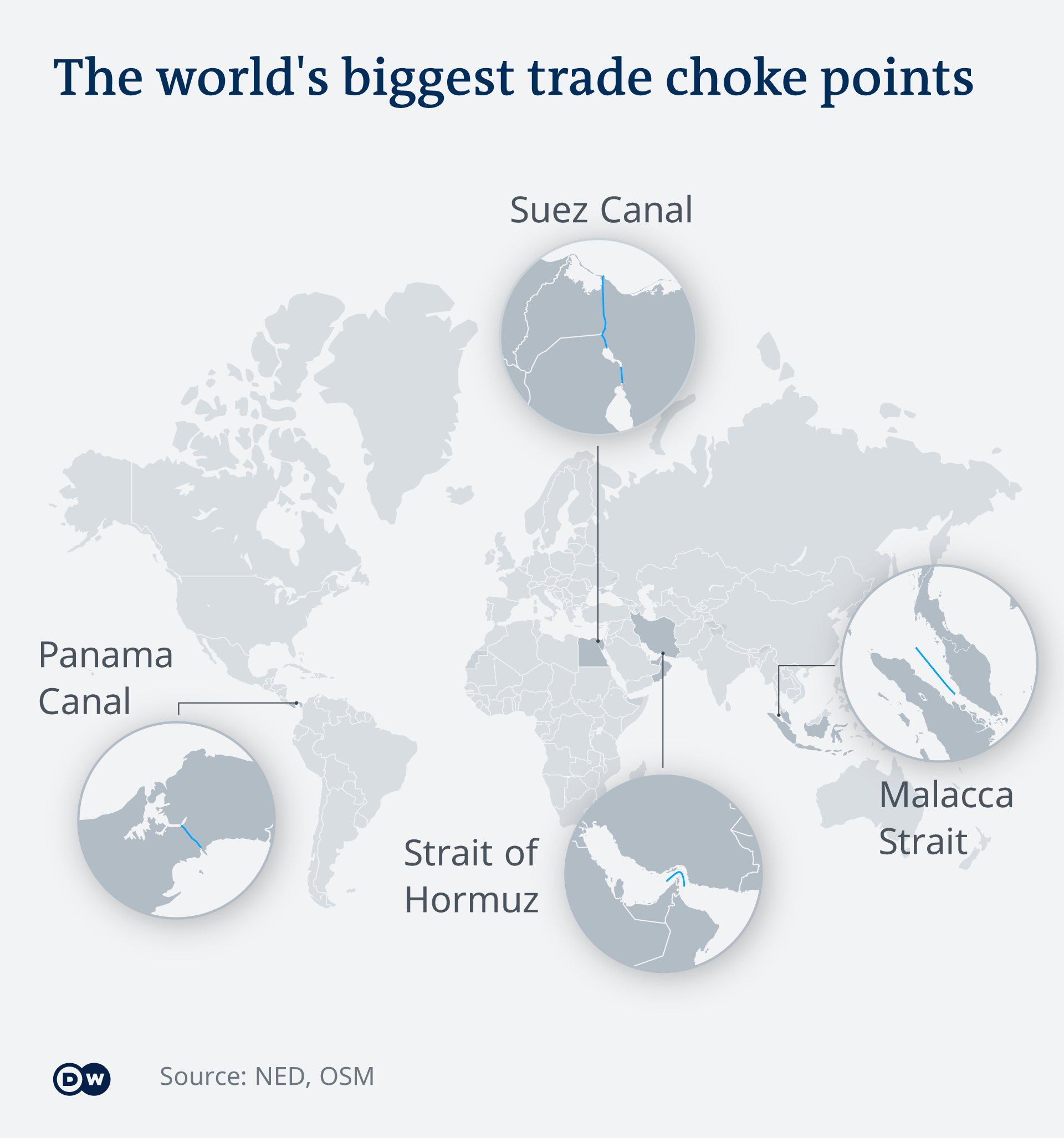 The sea passage between the Persian Gulf and the Gulf of Oman that leads to the Indian Ocean is the most critical chokepoint for oil and gas.

Some 167 kilometers (90 miles) long, about a quarter of seaborne-traded oil and a third of the world’s liquefied natural gas passes through the strait.

The route is particularly vulnerable due to Middle East geopolitics. The strait connects many different powers and oil market players, including Saudi Arabia, Iran, the United Arab Emirates, Kuwait and Iraq.

The actual width of the fairway for the huge tankers is roughly 3 kilometers in both directions, meaning the waterway could be easily controllable during a conflict.

During the 1980-1988 Iran-Iraq war, the two sides sought to disrupt each other’s oil exports plying the strait.

Iran has repeatedly threatened to disrupt oil shipments through the strait in retaliation for US sanctions aimed at its energy exports. At one point, Tehran threatened to mine the waterway.

In May 2019, four vessels — including two Saudi oil tankers — were attacked off the UAE coast near Fujairah, just outside the strait.

In January this year, Iran seized a South Korean-flagged tanker in Gulf waters and detained its crew.

The 900-km long strait is Asia’s primary chokepoint and one of the world’s busiest shipping lanes. The waterway links Asia with the Middle East and Europe, carrying about 40% of global trade. More than 100,000 vessels ply the waterway every year.

At its narrowest point off Singapore, the strait is only 2.7 kilometers wide, creating a natural bottleneck, as well as potential for collisions, grounding or oil spills.

Some 16 million barrels per day of oil flowed through the waterway in 2016, making it the world’s second most important energy passageway.

The strait has become increasingly important strategically to Beijing, with nearly 80% of China’s crude oil imports passing through, from the Middle East and Africa.

This artificial waterway connects the Mediterranean to the Red Sea and prevents ships from having to pass through the Cape of Good Hope, off South Africa. The canal knocks about 8,900 kilometers off a ship’s journey time.

The Egyptian government expanded the canal in 2014, almost doubling the number of ships that can use the waterway per day from 49 to 97. Despite this, some supertankers can still not ply the canal, and some have to offload part of their cargo onto smaller vessels and reload at the other end.

Suez saw about 12% of world trade volume pass through last year. The Suez Canal Authority reported that a record of 18,880 ships traversed the passageway in 2020, carrying more than 1 billion tons of cargo.

At least two other ships have got stuck in the canal since 2008 — one forced a three-day closure.

The canal is also seen as highly vulnerable to political unrest in the Middle East. However, the Arab Spring and subsequent fall of Egyptian President Hosni Mubarak in 2011 had little impact on traffic.

In 2013, Cairo said it had foiled an attack on a container ship which was aimed at disrupting shipping in the busy Suez Canal.

The 80-kilometer Panama canal spans the narrowest part of Panama and connects the Atlantic and Pacific Oceans. One of world’s busiest shipping routes, it has historically handled about 5% of world trade and nearly 14,000 transits were made last year.

In 2016, Panama opened the long-delayed $5.4 billion expansion, which triples the size of ships that can travel the canal.

In theory, 98% of the world’s shipping can now ply the route, avoiding the lengthy and hazardous Cape Horn route around the southern tip of South America.

Although the canal isn’t subject to the same geopolitical risks as other chokepoints, the coronavirus pandemic and adverse weather have created bottlenecks in recent months, delaying the transport of container ships and supplies of gas from the US Gulf Coast.

EU vows to crack down on disinformation targeting democracies | News...