The European Commission adopted a recommendation for effective vaccine strategies and deployment back in October 2020. In it, refugees are cited as a priority group. There is no mention of undocumented migrants.

Individual nations, however, are each responsible for developing their own vaccine strategies as well as defining and prioritizing groups for vaccination.

Refugees and migrants a priority

Refugees and undocumented migrants are some of the most marginalized people in Europe.

They belong to categories defined by legal status. When asylum-seekers are applying for or are granted asylum on the grounds that they are fleeing war or persecution in their home countries, they have temporary residency rights as official refugees.

Undocumented migrants, on the other hand — even those born in Europe who have inherited their status from their parents — are not recognized by the current asylum framework.

One of the main reasons both these groups need to be prioritized in national vaccination strategies is because they tend to live in such perilous conditions. The aid group Doctors Without Borders (MSF) has reported that refugees are three times more likely to be exposed to infection than people living in regular settings.

“Oftentimes, social distancing and quarantine measures are impossible since they usually live in precarious settings, such as overcrowded apartments or informal encampments,” Gianluca Cesaro from the Platform for the International Cooperation on Undocumented Migrants (PICUM) said.

European countries like the UK, the Netherlands, France, Spain and Italy are including undocumented migrants in their vaccination strategies, according to official sources. Belgium’s Ministry of Health said the country would vaccinate undocumented individuals, though it remains unclear whether it will do so as part of an official national strategy.

Germany and Serbia officially reported that refugees and asylum-seekers would be prioritized in their respective vaccine strategies.

The Greek Ministry of Health clearly guaranteed refugees in camps social security numbers so they could access vaccines, but there was no mention of undocumented migrants, according to Villads Zahle from the European Council on Refugees and Exiles (ECRE),

Spanish and Bosnian authorities, on the other hand, are working to return many asylum-seekers in their camps to countries of origin. And Poland has explicitly excluded non-resident foreigners from its vaccination program. 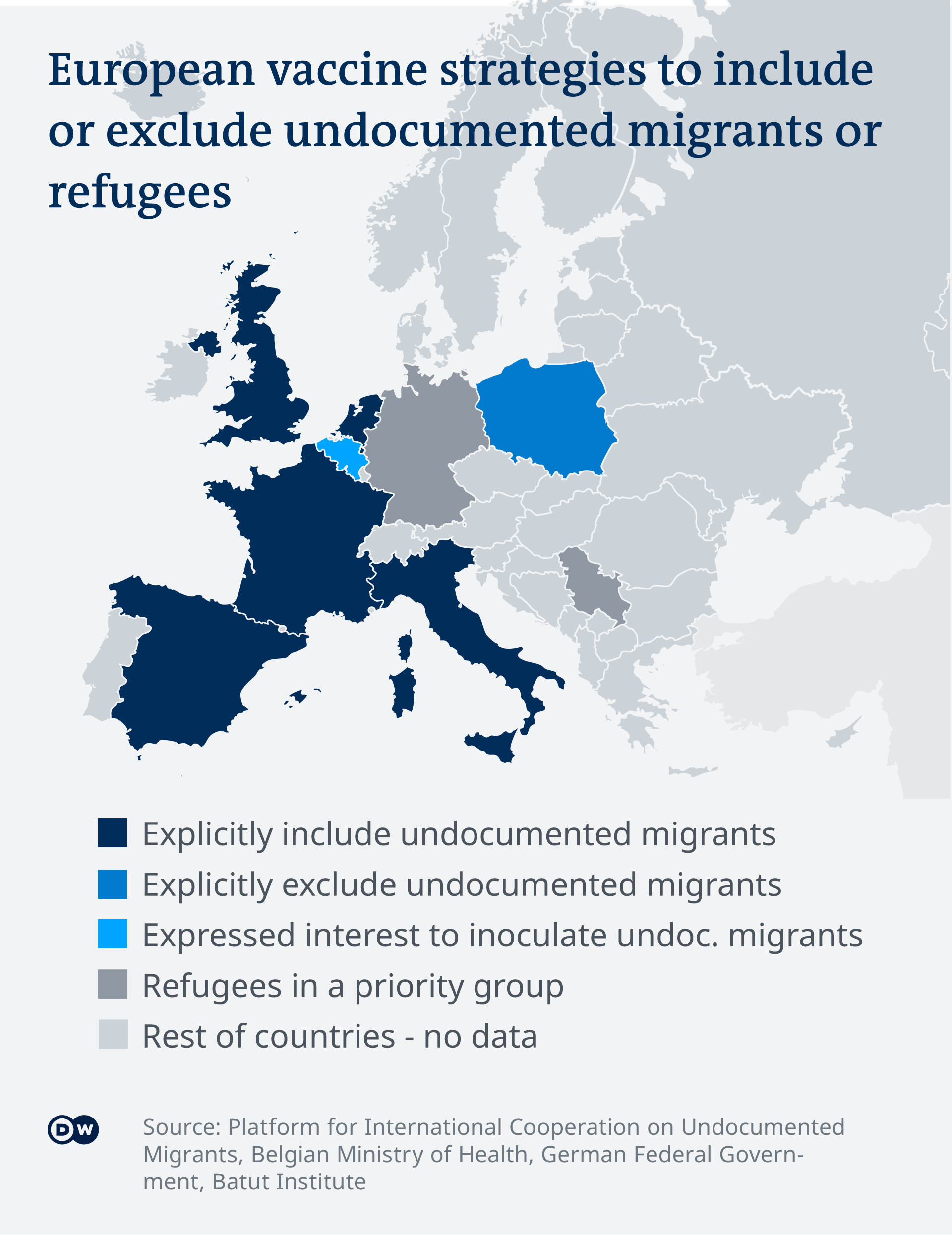 The United Nations High Commissioner for Refugees (UNHCR) said some 28 EU and non-EU countries across Europe will include refugees and asylum-seekers in their national vaccination campaigns, although no official data was provided from the organization to indicate precisely which countries these are.

Despite some European countries having made efforts, however, putting such plans into practice can be difficult.

“It is one thing to include undocumented people in the vaccination strategies on paper. It is another to actually grant them meaningful, practical access to the vaccines. This means governments and authorities need to enact effective outreach strategies to get to these communities,” Cesaro said.

He explained that undocumented migrants need to be able to trust local communities but that discriminatory and criminalizing state policies — as well as the fact that a social security number is often needed for vaccine registration — usually lead such individuals to avoid all contact with authorities. Cesaro added that local grassroots organizations with long histories of working with undocumented communities will have to be enlisted to reach them.

Shabia Mantoo, the UNHCR’s global spokesperson, added that undocumented individuals must be able to understand how to approach health authorities and register for vaccinations, as well as being able to inform themselves about vaccines to reduce hesitancy about getting the shot.

Impact of COVID-19 on migrants unknown

In many European countries, undocumented migrants can receive emergency health services. In others, they are ineligible for free or covered care and are deeply worried that seeking care will result in exposure to deportation, according to a PICUM report.

Fear of deportation, the report added, makes them less likely to visit a doctor or hospital even when sick. 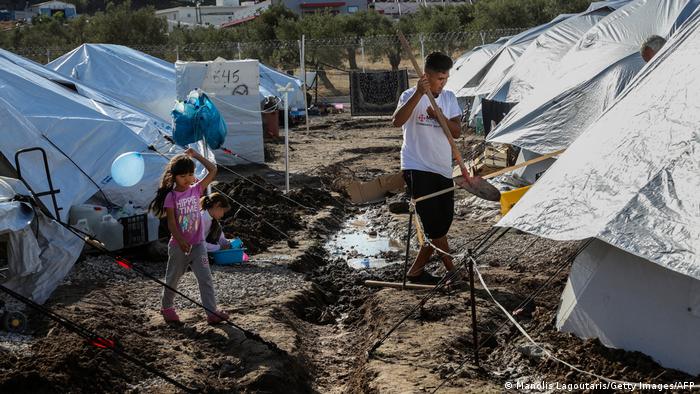 “Data depends on reporting by national authorities. So we will not always have the full picture, just because there are so many discrepancies when it comes to testing and data segregation and also reporting,” Mantoo said.

Mantoo explained that although there had been coronavirus transmissions in European refugee facilities, no major outbreaks had been reported in any camps. According to PICUM, many European countries chose to release people from camps in an effort to avoid major outbreaks.

A PICUM survey on the impact of the COVID-19 pandemic on the lives of undocumented people, however, found that around 80% of the respondents had experienced the loss of job and income and were not able to access unemployment benefits. Their situation has worsened in almost every way throughout the course of the pandemic, as the British Medical Journal reported in its publication BMJ Global Health. 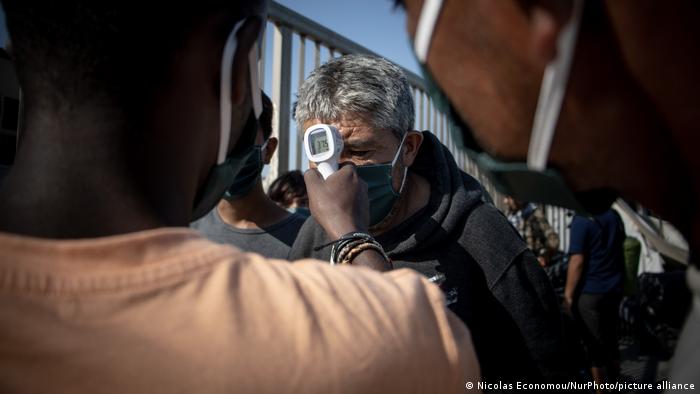 Even if the vaccine reaches undocumented individuals, it may not lead to sustained or improved access to basic health care for undocumented people, says Alyna Smith, an advocacy officer from PICUM.

“We believe that undocumented people and generally everyone should be able to have full access to health care based on health needs and not on residence status,” adds PICUM’s Gianluca Cesaro.

Furthermore, warns the UNHCR report, excluding refugees and other displaced people or non-nationals from vaccination plans carries the risk of ongoing transmission in these populations, with spillovers into the national population.

According to the statistics from the European Commission, there are currently around 2.6 million refugees in Europe — mostly settled in Germany, Spain, France, Italy and Greece. A Pew Research Center report estimated that as many as 4.8 million undocumented migrants were living in Europe in 2017 — almost half of them in Germany.

Larry Elder: I’ll be an effective Governor in a Democrats supermajority...

Unvaccinated are at risk of getting the Delta Variant