Prime Minister Benjamin Netanyahu and his Likud party have decided to target four “change bloc” MKs in a bid to get at least one member of the proposed coalition to defect and torpedo efforts to get a new government sworn in.

Efforts in recent days have focused on Yamina MKs Ayelet Shaked and Nir Orbach, with rallies being held outside their homes and Netanyahu orchestrating a campaign to sway them that includes calls from prominent rabbis.

In a meeting attended by Netanyahu and top Likud officials on Thursday, it was decided to focus efforts on New Hope MKs Ze’ev Elkin and Sharren Haskel, and Yamina MKs Orbach and Idit Silman, the Kan public broadcaster reported.

They decided to pressure them by getting friends and colleagues to appeal to their ideological beliefs after efforts to lure them with lucrative positions had failed, Kan said.

In an interview with Channel 12 news, the rabbi of Orbach’s synagogue would not deny reports that Netanyahu has been calling him to try to persuade Orbach to defect. He also said that Orbach now appeared to be blocking Netanyahu’s calls.

Orbach appeared to signal after meeting with Bennett on Thursday that he would not split with the Yamina leader and vote against the possible government, after he had begun considering such a move in recent days. Orbach has long voiced reluctance to back the coalition, but had previously vowed to resign from the Knesset rather than actively vote against the bloc. If he resigns, he will be replaced by Shirley Pinto, who supports the emerging government.

Meanwhile, there were conflicting reports about the stance of Elkin, a long-time Netanyahu confidant.

Channel 12 quoted him as telling Orbach that if the latter did not vote for the government, neither would Elkin. However, Channel 13 said Elkin was not wavering. 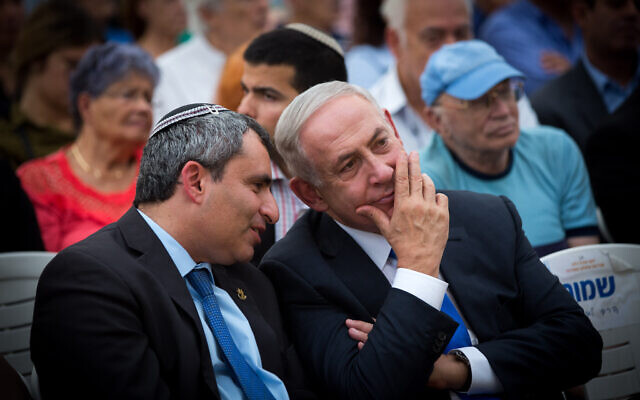 The factions that make up the would-be government combined have a bare majority of 61 seats in the 120-seat Knesset, meaning the opposition of any lawmaker could doom the government’s chances of being approved.

Beyond efforts to scupper the majority, Channel 12 reported that the new coalition was also still trying to wrap up a number of contentious issues that threatened to undermine the cooperation between the disparate groups.

Among the issues still at hand was LGTB rights, which the left-wing Meretz was pushing, while the Islamist Ra’am was insisting that no mention of the issue be included in the coalition’s guiding principles. 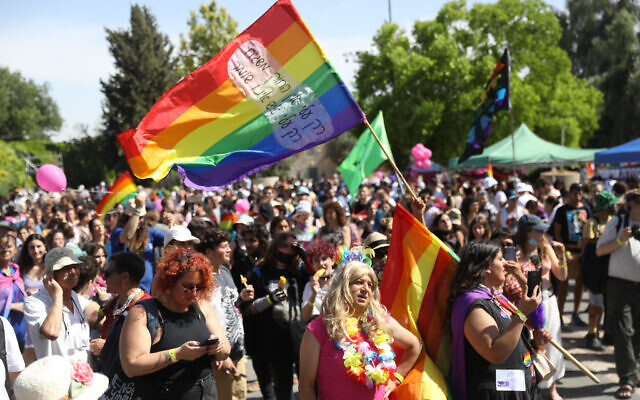 As party leaders worked to keep their MKs in check and united ahead of the vote, Yair Lapid was also reportedly working to get the support of Ahmad Tibi’s Ta’al faction and its two MKs, in case a current coalition member drops out.

While the rest of the Joint List has said that it will not back the coalition, Tibi has so far been noncommital.

The “change-bloc” will likely have to wait until June 14 before the government can be sworn in, giving Netanyahu and Likud ample time to try and secure a defector. However, Channel 13 said it was possible the vote could be held as soon as Wednesday but did not detail how this could come about.

On Thursday morning, the “change bloc” parties submitted 61 signatures, demanding a vote on a new Knesset speaker early next week. The move was intended to prevent Knesset Speaker Yariv Levin from stalling on a vote of confidence in the new government and to ensure that it happened next week, rather than the week after that. 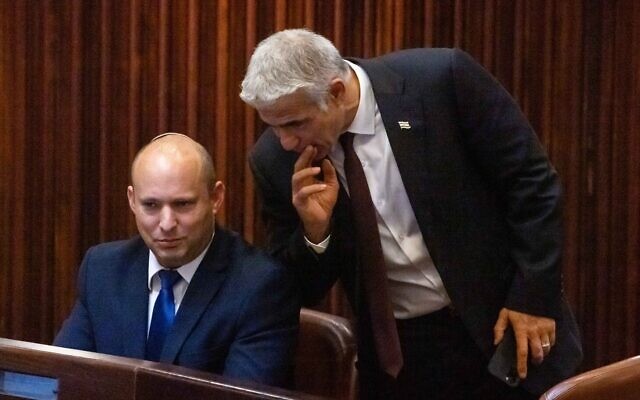 Orbach’s signature had apparently been given to his party’s leaders, but on Thursday he quickly moved to withdraw his support. The Arab majority Joint List, which is not part of the coalition, then moved to prop up the effort by adding its own six votes to the bid.

But bloc leaders Yamina and Yesh Atid quickly distanced themselves from the Joint List’s backing, saying it had not been sought. Though Islamist party Ra’am is part of the new coalition, the Joint List is seen as less palatable to many right-wing members of the bloc.

Yamina then said it would only vote to replace the Knesset speaker once the government itself was approved.

As Knesset speaker, Levin can legally delay a vote on the new government for a week or more, giving Netanyahu’s Likud party more time to try to peel away rebels from the right-wing factions of the unity coalition.

Hundreds took part in rallies outside the homes of Orbach and Shaked, a day after Lapid officially declared that he can form a government. If formed, the government would end the premier’s run of 12 consecutive years in office and relegate his Likud party and allied factions to the opposition.

At the rally outside Shaked’s home in Tel Aviv, the leader of the far-right Religious Zionism party Bezalel Smotrich, a former Yamina lawmaker, urged Shaked to come out to “those who embraced you and who you embraced, those who believed in you and you believed in them… They really feel betrayed.”

Some of the protesters then began chanting, “Shame, shame,” before Smotrich quieted them. He then led a group chant: “Ayelet, listen, the people of Israel live!” 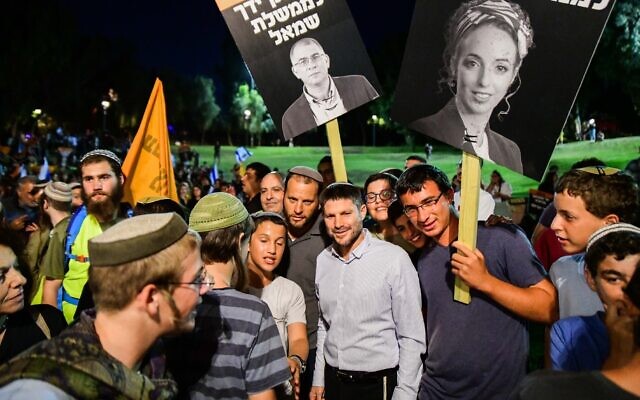 Protesters brandished signs with pictures of Shaked, Orbach, and Yamina’s Idit Silman on which was written: “Stop! Don’t lend your hand to a left-wing government.” Some also waved orange flags, recalling the color used by protesters against Israel’s dismantlement of settlements and withdrawal from Gaza in 2005.

The demonstrations against the so-called “change government” have been particularly intense in recent days, taking place outside the homes of prospective ministers, including Bennett, the Yamina lawmakers and Meretz’s Tamar Zandberg. The hecklers have included pro-Netanyahu activists, right-wing families of terror victims and young members of the national-religious camp.

On Thursday morning, the Shin Bet security service said its unit that protects the top officials of the state, Unit 730, had placed a security detail around Bennett, the coalition-to-be’s first prime minister. Security had already been increased last month in response to threats against his life, the party said at the time.

On Monday, the Knesset Guard reportedly increased security around Shaked due to threats she received.

On Tuesday, Meretz MK Zandberg took her family out of their home following a string of threats against her and her baby daughter, in the wake of false information published about her proposed legislation to restrict the proselytizing of minors.

Green energy is supposed to be all the rage among investors

To ban or not to ban abortion in Florida