The National Border Patrol Council (NBPC) endorsed Rep. Elise Stefanik for House GOP conference chair. The assumption is that the current conference chair, Liz Cheney, will be ousted from that position next week. Stefanik has been aggressively seeking support from Republicans in the House.

Why is the National Border Patrol Council weighing in on this battle in the House? Why would they choose to endorse Stefanik over Cheney, if they must enter the fray? The President of NBPC is Brandon Judd. The labor union’s membership consists of about 17,000 border patrol agents and support staff. Judd was a strong supporter of Trump’s border policies and actions to handle the flood of illegal migrants rushing the southern border. Is Stefanik following the Trump playbook in receiving the union’s endorsement? It looks that way. 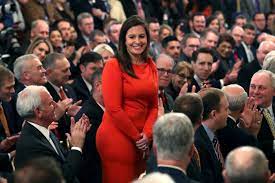 Brandon Judd released a letter in support of Elise Stefanik as the GOP’s 3rd most powerful position in House leadership. It is a five-paragraph endorsement that focuses on Stefanik’s support of law enforcement and border protection.

I have been impressed by some and underwhelmed by others,” Judd wrote. “I am happy to say Congresswoman Stefanik easily fits into the first category. She is one of the most ardent supporters of the Border Patrol’s mission as well as law enforcement generally.”

Representative Stefanik supports funds to build the wall, technology to augment the Border Patrol’s capabilities, and more resources for the men and women on the front lines. I am truly grateful to say in the strongest possible terms that Elise opposes policies that have been so dangerous for our communities such as sanctuary cities, licenses for illegal immigrants, and public assistance for those who chose to violate our immigration laws (the magnets that draw people and encourage them to cross our borders illegally).

She also opposes amnesty for those whose very first act in coming to the U.S. was to knowingly and willingly cross our borders illegally. Representative Stefanik has been a true border security champion.

The part that caught my attention is when Judd references Stefanik’s support for building the border wall and opposing amnesty. As Erick Erickson pointed out in his newsletter Friday, in the past, Stefanik has voted differently.

She co-sponsored a pathway for Dreamers and amnesty called the USA Act.

“I know that Elise is very strong on border security, I know that she wants to unify the Conferences’s voice.” – Brandon Judd, National Border Patrol Council President

Thank you, Brandon. I’m honored to be endorsed by our brave Border Patrol! pic.twitter.com/HYpKClDY7m

Liz Cheney voted in support of Trump and House Republicans on all these votes. The irony now is that Cheney is being portrayed as some anti-Trumper now when she was usually a reliable vote for his policies and certainly on the big issues like tax cuts and border security. Stefanik has ‘evolved’ during her time in office. She’s still young – she is 37 years old and in her 4th term in the House. She came in as a moderate Republican and has moved more to the right. Liz Cheney was always a reliable conservative. Let’s not pretend otherwise now that Stefanik is ready to shove Cheney aside.

Stefanik has been very successful in recruiting Republican women to run for office and she deserves a lot of credit for that. The seats that were flipped in the House in the last election were due to Republican women’s victories. She was strongly in support of President Trump during the impeachment circuses in Congress. He is rewarding her by supporting her against Cheney who has spoken out against the rioting on Capitol Hill in January and taken Trump to task for denying some election results.

She will likely win the vote in Wednesday’s conference meeting. She has the support of Kevin McCarthy and Steve Scalise, according to reports. Some conservatives are beginning to voice concern with the choice, though, including The Club for Growth. Stefanik voted against Trump’s Tax Cuts and Jobs Act of 2017. That legislation spurred on a history-making economy with all demographics across the board benefitting from it, as we now know. She also voted to ban drilling in the Gulf of Mexico which is a big problem for me.

It will be interesting to see the fallout from this leadership election. Stefanik is a quick-footed politician. She’s articulate and a good face for the party. She’s young with future potential if she so chooses to remain in politics. It’s important, though, to be honest. If Republican leadership wants to get rid of Liz Cheney, so be it. Cheney keeps shooting herself in the foot at this point. Maybe she’s ready to get the boot. A unified message from House leadership is important as we move forward in the 2022 election cycle. This in-fighting isn’t productive when the GOP is in a good position to recapture the House majority and oust San Fran Gran from the speakership.

The ‘WSJ’ on Trump and Georgia