After refusing to comment on the political situation during the last two weeks of hostilities between Israel and Hamas, Yamina leader Naftali Bennett broke his silence on Sunday, lambasting the government and saying “a number of options” exist, signaling that his joining a coalition with the so-called “change bloc” was still on the table.

“I have refrained from speaking out against the government while soldiers and police endangered their lives on the ground,” Bennett said in a lengthy post on Facebook, launching into a biting critique of Prime Minister Benjamin Netanyahu’s government.

“I do not remember such a period of weakness, lack of function and national embarrassment,” Bennett wrote, saying that Israelis’ personal security “had deteriorated to an unbearable level.”

The Yamina chair also lambasted the government’s handling of the coronavirus crisis as “crooked decision-making dictated by personal and political considerations.”

Israelis take shelter in the stairwell of their apartment building as a siren sounds a warning of incoming rockets fired from the Gaza Strip, In Ashdod, Israel, May 19, 2021. (Heidi Levine/AP)

“And all this while creating a smokescreen of personality worship for the leader, while anyone who dares to criticize him is severely attacked,” he continued.

Bennett noted the events of the past three weeks, which saw deadly rioting between Jews and Arabs in Israel; clashes on the Temple Mount, and in the East Jerusalem neighborhood of Sheikh Jarrah over the pending evictions of a number of Palestinian families; and the start of rocket fire by Hamas, which escalated into a major conflict with Gaza that was brought to an end by a ceasefire agreement last Friday.

“Even Netanyahu’s most ardent supporters are beginning to understand that admiring the leader at all costs is not a substitute for policy,” Bennett wrote. 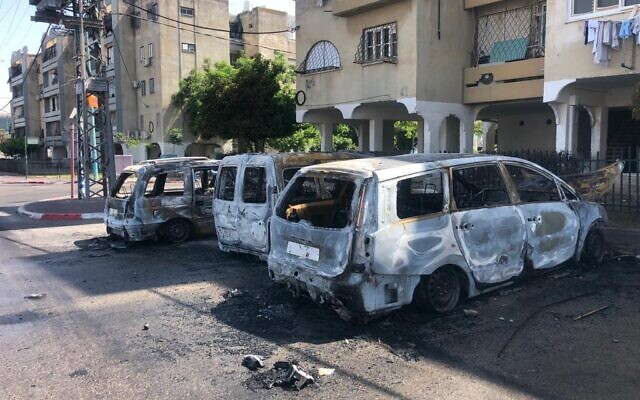 Cars in a Jewish neighborhood of Lod burned during riots in the mixed city, May 18, 2021 (courtesy HaShomer Hachadash)

“The state’s deterrence – in the face of a group of terrorists in Gaza and in the face of armed gangs inside Israel – is at the lowest point in its history,” Bennett said. He also accused the government of a similar failure over the years to prevent the arming of the Lebanese Hezbollah terror group, which, he said, now possesses 150,000 rockets aimed at every city in the country.

And amid the developments, “there are ministers in the government who are busy day and night with politics, fleeing in difficult moments,” he wrote. “All power, with zero responsibility.”

Citing the four “pointless” inconclusive elections Israel has held over the past two and a half years, Bennett noted that there is still no state budget due to the political situation.

“Our inner rivalries and self-destruction weaken us. When the enemy recognizes a weakness, it attacks,” he said.

“This is not the time to stick to boycotts. This is the time to do the necessary thing and form a functioning government,” he said, referring to key political parties that have ruled out joining a coalition with other potential partners.

“One who drags the country to the fifth election, to more poison and hatred, to another year of state dysfunction, to a huge waste of money – plays into the hands of those who want our harm,” he warned. “That would be one mistake too many. 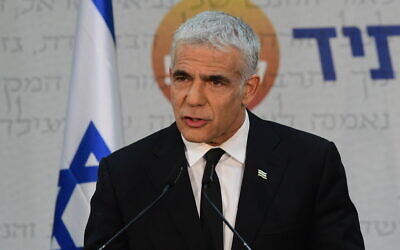 “Even today, there are several options for forming a government, if we just remove the boycotts and understand the enormity of the hour,” he stressed.

The mandate of Yesh Atid’s Yair Lapid to form a government ends on June 2. He and Bennett were on the verge of clinching a coalition deal with the support of the Islamist Ra’am party when the fighting with Gaza terror groups broke out, leading Ra’am chief Mansour Abbas to back out and Bennett to later declare that the option was no longer viable.

“While they publish ‘seemingly’ right-wing posts and articles, they continue to charge Left and work to form a government that will be jointly dependent on the left-wing parties of Lapid, Meretz and Labor,” the statement said, calling on Bennett and New Hope’s Gideon Sa’ar to declare that they will not join such a coalition.

Countering the criticism laid out by Bennett, the statement added that: “Prime Minister Netanyahu took Israel out of the coronavirus [pandemic] first in the world, led a campaign that inflicted heavy blows on Hamas that took it back a decade, mobilized broad international support that enabled the IDF to complete the mission and stopped the riots within the country.”

The Yamina head’s comments came days after the Walla news site said that in the wake of Bennett apparently burning his bridges with the so-called “change bloc,” Netanyahu has significantly watered down his original offer to the right-wing party head. 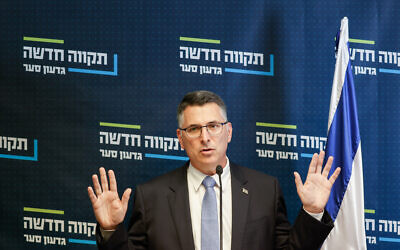 Meanwhile, according to several Hebrew media reports last week, Gideon Sa’ar, the head of the right-wing New Hope party, is reportedly weighing the option of a power-sharing coalition with Netanyahu in which Sa’ar goes first as prime minister. The reports said that despite his former steadfast refusal to enable Netanyahu to form another government, Sa’ar has softened his objection to any political cooperation since Bennett backed away from the change coalition.

According to Channel 12 report, however, Likud officials believe Sa’ar may agree to a rotation deal since he has only promised not to serve “under” Netanyahu and not “alongside” him. The network further speculated that Bennett would then also be compelled to agree to join a Sa’ar-Netanyahu-led coalition, due to his promise not to torpedo a right-wing government if it can be formed.

If Lapid fails to cobble together a coalition during his 28-day window, a majority of lawmakers could try to endorse any Knesset member as prime minister. A leader has never before been elected during that time period in Israel. If that 21-day period fails to yield a coalition, the country would be forced into the unprecedented scenario of a fifth election in two and a half years.

I’m proud to work at The Times of Israel

I’ll tell you the truth: Life here in Israel isn’t always easy. But it’s full of beauty and meaning.

I’m proud to work at The Times of Israel alongside colleagues who pour their hearts into their work day in, day out, to capture the complexity of this extraordinary place.

I believe our reporting sets an important tone of honesty and decency that’s essential to understand what’s really happening in Israel. It takes a lot of time, commitment and hard work from our team to get this right.

Your support, through membership in The Times of Israel Community, enables us to continue our work. Would you join our Community today?