Intense Arab rioting broke out in the central Israeli city of Lod late Tuesday, with three synagogues and numerous shops reportedly set on fire, and dozens of cars set alight. The Israeli government declared a state of emergency in the mixed Jewish-Arab city, and urgently despatched several Border Police companies to work to restore order.

Some residents reported power was cut in their homes and petrol bombs were thrown through their windows, Channel 12 news said, and police acknowledged having to escort some residents from a community center to their homes as Arab mobs marauded in the streets. A local man, 56, was seriously hurt when hit by a slab in his car, and was hospitalized. Another local resident was seriously hurt.

The mayor, Yair Revivo, said City Hall and a local museum were also attacked, and compared the situation to the Nazis’ 1938 Kristallnacht pogrom. “Civil war” is breaking out, he said, lamenting that decades of coexistence efforts had collapsed.

After he appealed directly to the prime minister for urgent help, a state of emergency was declared in the city for the first time in decades, and large Border Police forces deployed to work to restore order. “Prime Minister [Benjamin] Netanyahu directed that lawbreakers be dealt with severely and that units on the ground be reinforced in order to restore quiet and order to the city forthwith,” a government statement said.

????A synagogue is burning in Lod

“We are seeing a situation in the mixed [Jewish-Arab] cities that we have never seen before, including the incidents of October 2000,” Shabtai said. (Widespread rioting broke out among Arab Israelis in October 2000 at the start of the second Intifada.)

Arab violence erupted in numerous other cities across Israel, and there were also reports of Jewish revenge attacks, including in Lod, where a Muslim cemetery was set ablaze.

Attacks were reported on Jewish homes in Ramle, where cars were also stoned. In Acre, a restaurant and a hotel were set ablaze.

Roads were blocked in Umm al-Fahm. There were confrontations reported after midnight in Jaffa, where a car was overturned and set alight, and even minor fights reported in Tel Aviv’s Habimah Square.

The surge in violence came hours after Hamas fired some 130 rockets at central Israel, and claimed “victory” in what its leader Ismail Haniyeh said was “the battle for Jerusalem.” Hamas later hailed Israeli Arabs for joining the struggle against Israel.

Lod resident Shiloh Fried told Channel 12: “Gangs of Arab youths are going street to street, burning stores, smashing windows… Jewish families are huddled at home, terrified of going out… Their cars are being set alight outside… Police are nowhere to be seen.”

There were reports that some residents were avoiding using public shelters during rocket sirens, out of fear they would be attacked by mobs.

Channel 12 also showed footage of Jewish residents of Lod hurling rocks at cars of Arab residents, though Fried said these incidents were minor ones compared to the scope of Arab rioting. An Arab resident was killed on Monday night amid violence, in what Jewish eyewitnesses said was self-defense against Arab assailants.

Arab Israelis gesture and wave Palestinian flags during the funeral of Mousa Hassouna in the central Israeli city of Lod near Tel Aviv, on May 11, 2021. (AFP)

Before the army was sent in, Lod Mayor Revivo had warned “this is too big for the police.” 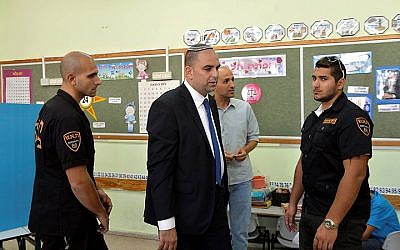 “This is Kristallnacht in Lod,” Revivo said on Channel 12. “I have called on the prime minister to declare a state of emergency in Lod. To call in the IDF. To impose a curfew. To restore quiet… There is a failure of governance… This is a giant incident — an Intifada of Arab Israelis. All the work we have done here for years [on coexistence] has gone down the drain.”

“All of Israel should know, this is a complete loss of control,” Revivo added, sounding desperate. “This is unthinkable. Synagogues are being burned. Hundreds of cars set alight. Hundreds of Arab thugs are roaming the streets… Civil war has erupted in Lod… The Orthodox-nationalist community here has guns. I’m imploring them to go back home but they understandably want to protect their homes. Petrol bombs are being thrown into [Jewish] homes. The situation is incendiary.”

Situation getting out of hand in Lod. An Arab citizen shoots at Israeli police with an automatic weapon. #Israel pic.twitter.com/nxPfcAh14V

Reacting to the ongoing riots in mixed Arab-Jewish cities across Israel, Meretz MK Isawi Frej said “anyone who calls themself a public figure in Arab society must call for restoring calm.”

“I call on [the Joint List’s] Ahmad Tibi, Ayman Odeh along with Arab mayors: This is the test of your leadership. Don’t hide. Don’t only speak out during elections. It’s your job to go out and influence,” Frej said.

President Reuven Rivlin had urged Arab Israeli leaders earlier on Tuesday to speak out against the previous night’s outbursts of violence.

“I just made an urgent phone call to Mudar Younes, chair of the Arab Councils Mayors Committee, and passed on a sharp message about the Arab violence that went wild in the streets of some mixed cities last night, including Lod, Ramle and the cities of the Triangle,” Rivlin said in a statement on social media.

“We must not let those sights recur. We must not become hostages to the terrorist murderers of Hamas and Islamic Jihad, who fire on Israel’s citizens indiscriminately.” 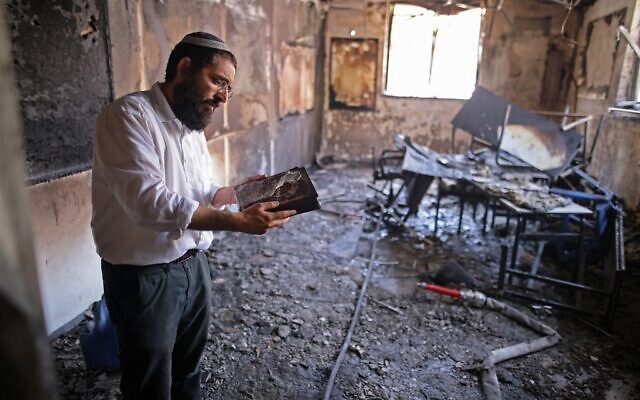 A rabbi inspects the damage inside a religious school in the central Israeli city of Lod, on May 11, 2021. The school was allegedly torched by a mob of local Arab residents on the night of May 10. (Ahmad GHARABLI / AFP)

In his statement, Rivlin said he asked Younes “to do everything in his power to calm things down. The people of Israel, Jews and Arabs alike, must hear the Arab leadership sounding a clear and strident voice against this wild violence, against damage to synagogues, against this wild behavior. The police will do all that is required to restore the peace. I ask for cooperation from the Arab leadership to restore calm and law and order to our streets.”

Oil Reaches $80 per Barrel, a seven-year-high

Politics August 9, 2022
The title of the page
Go to mobile version