There is legitimate criticism of how Prime Minister Benjamin Netanyahu handled the events in Jerusalem. There was the decision to block Arab youth from sitting near Damascus Gate during Ramadan, which made little sense when it was made; and then deciding – at the last minute – to block Jews from marching through that gate on Jerusalem Day, which has been customary for years.
Don’t misunderstand. No one should have marched through the gate. But the decision to ban the march should have been made days earlier, not seconds before it was supposed to take place, when some of the marchers were already there. That made it look like Israel was scared and weak. So it was no surprise when just a few hours later Hamas fired a volley of seven rockets in the direction of Israel’s capital. 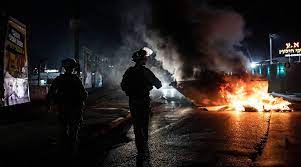 I met there a member of the Dajani family, whose home is slated for eviction. The Dajanis used to live in the Katamon neighborhood of Jerusalem, they said, and the original home is still there on Rehov Rachel Imeinu. They fled in 1948 during the War of Independence, and spent the following years as refugees in Syria and then Jordan. When they received permission to build a new home in Sheikh Jarrah in 1956, they thought they would finally be able to move on.
The legal battle over Sheikh Jarrah is ongoing, and how it will end I do not know. What I did learn there that day was that the Sheikh Jarrah story is primarily a human tragedy. Strip away politics and ideology and it is a story of Arab families who became refugees after a war 73 years ago, and who might now become refugees once again.
This has nothing to do with whether they should be evicted. In the end, they are people, and their pain is real. 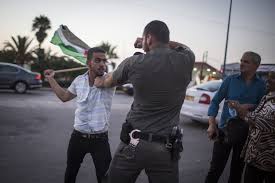 The other conclusion is that what is happening in Sheikh Jarrah has nothing – absolutely nothing – to do with the ongoing war with Hamas in the Gaza Strip. It is this week’s convenient excuse for Hamas to do what it has been striving for since its inception 34 years ago: destroy the Jewish state of Israel.
Unfortunately, the world will have us believe – as they so believe – that Israel instigated this conflict over the planned eviction of the Dajanis and their neighbors, as well as covering up the way it managed the riots in Jerusalem in the run up to Jerusalem Day.
There is legitimate criticism of how Prime Minister Benjamin Netanyahu handled the events in Jerusalem. There was the decision to block Arab youth from sitting near Damascus Gate during Ramadan, which made little sense when it was made; and then deciding – at the last minute – to block Jews from marching through that gate on Jerusalem Day, which has been customary for years.
Don’t misunderstand. No one should have marched through the gate. But the decision to ban the march should have been made days earlier, not seconds before it was supposed to take place, when some of the marchers were already there. That made it look like Israel was scared and weak. So it was no surprise when just a few hours later Hamas fired a volley of seven rockets in the direction of Israel’s capital.
But the idea that all this led to Hamas’s decision to attack Israel is absurd. As if Hamas needs a reason. Its raison d’etre is Israel’s destruction. One day the excuse will be Jerusalem, and the next day it’ll be something else.
The real story behind the Gaza escalation is Hamas trying to show the Palestinian people that it is the true protector of Jerusalem, not Palestinian Authority President Mahmoud Abbas. Hamas was hoping to show that in the parliamentary elections scheduled for later this month, but they were canceled by Abbas.
The PA president himself used Jerusalem as an excuse for why the elections couldn’t take place – Israel’s refusal to open ballots in east Jerusalem – but that was a lie. The true reason was because he knew he would lose.
And this is all-important, because if we are to believe the media and diplomatic circles, then it was Israel that provoked this conflict, Israel that made it happen: Damascus Gate, Sheikh Jarrah, the Temple Mount, Jerusalem Day, and more. Lies spread, unfortunately, and they work.
THE QUESTION now is how to move forward, and how to end this round of war.
It won’t be easy. The IDF will need to seriously review how it managed this conflict, which seemed for the first day and a half to have completely been caught by surprise.
Under Chief of Staff Lt.-Gen. Aviv Kohavi – a former commander of the Gaza Division and head of Military Intelligence – the IDF was not ready for the rocket barrage at Jerusalem, and it took a while to catch up. Israel lost critical time. 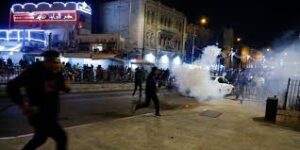 The army on Monday was busy preparing instead for a large-scale exercise that was supposed to begin on Tuesday. Only on Monday afternoon was it canceled, and when rockets later that day landed near Jerusalem, the IDF response was minimal. This was partially Kohavi’s attempt to contain the situation, but it also reflected how the current government in Jerusalem does not function. Netanyahu is distracted by his bribery trial, which is ongoing, and his political trouble, which is also ongoing.
Within the IDF top command, there is an understanding that Hamas needs to be hurt. It is true that the military shook off the initial shock and got to work taking out hundreds of targets and a couple of dozen mid-level and senior commanders. But none of that has succeeded in stopping the rocket fire.
Hamas has shown in this round an impressive ability to keep launching rockets despite Israeli counter-operations. This shows an intact and sophisticated command-and-control system, as well as advanced communication capabilities. Combined with an impressive rocket arsenal – and the multi-barreled launchers to fire them – Israel needs to consider that if left alone, Hamas could fairly soon turn into a threat of even greater proportion – a new Hezbollah in Israel’s South.
Does that mean Israel needs to send ground troops into Gaza? I do not know. What I do know is that if this is how strong and advanced Hamas is today, then three, four or five years from now will be far worse.
The other problem is that Israel currently has no real victory image that it can present to the public – in Gaza and in Israel, or around the world.
Who does have one? Hamas.
Truthfully, they have several. The first was the rocket fire to Jerusalem, the second was the barrage on Tel Aviv – unprecedented in size – and the third was the most important and most concerning: sparking internal strife in Israel.
The Jewish-Arab riots are a huge victory for Hamas. Using economic incentives, Israel has tried for years to get the Palestinian people to rise up against the authoritarian terrorist leaders who control them, without success.
Hamas, on the other hand, has successfully shown Israel how it can start a fire that no one seems to know how to put out. Besides scoring an impressive accomplishment for the terror group, the situation in Lod, Bat Yam, Haifa, Acre and the Negev is causing damage to Israel that will take years, if not decades, to repair.
And this is the real threat to Israel today. It might take a day, a week, or longer, but this round of war with Hamas will come to an end, and a tense quiet will again settle back over the country.
The internal strife, however, will not go away, nor the ethnic suspicion that comes with it – Jews and Arabs in Israel are looking at each other a little differently today. This is what Hamas wanted, and that is what Hamas accomplished.
Finally, in the background to all of this, of course, is Israel’s continuing unstable political condition.
I am sure many of you heard theories this week that Netanyahu planned this escalation, wanted it, and is taking advantage of it for his political benefit. The longer the fighting carries on in Gaza, the argument goes, the more difficult it will be for Naftali Bennett and Yair Lapid to form a right-center-left government with support from Mansour Abbas’s Islamist Ra’am party. Netanyahu knows this, and thus wanted to steer Israel toward conflict.
Personally, I don’t believe that Netanyahu wanted violence, although I do think it is possible that when it broke out in Jerusalem, he didn’t immediately do more to try and deescalate.
But wherever you stand on the issue, here is the real problem with this question: the question itself.
The fact that we even have to ask ourselves whether this is a possibility underscores the problem of having a prime minister on trial when the country is at war. Every decision becomes suspect, including those with life-or-death consequences. This is bad – bad for Israel, and bad for Israel’s fragile democratic character.
When the violence eventually ends, Israel will have to find a way to rebuild and pick up the pieces. It won’t be easy, but we will need to keep our eye on the bigger picture. There is no alternative.
Tell Us What do you think?

‘We Lost Our Purpose’: Border Patrol Sees Surge In Suicides As Morale Plummets

Dr. Deborah Birx: U.S. Death Toll Could Have Been Much Lower...

Politics December 2, 2022
The title of the page
Go to mobile version