LONDON — Few voices in the British parliament have been more passionate and consistent in their support for Israel than that of the former Labour MP Joan Ryan.

Ryan, who quit Labour at the height of the antisemitism crisis which roiled the party under the hard-left leadership of Jeremy Corbyn, left the House of Commons 18 months ago.

This month, however, she is returning to the heart of Israel advocacy in the UK as head of the new London office of ELNET, a nonprofit which works to strengthen ties between Europe and Israel. (Full disclosure: the author of this article worked with Ryan on speeches and articles when she was an MP.)

Britain’s departure from the European Union, believes Ryan, makes ELNET’s decision to set up shop in the UK well-timed.

ELNET, which brings together European and Israeli decision-makers and opinion-formers from across the political spectrum, facilitates policy discussions on key strategic issues. In addition to its new London base, it already has offices in Paris, Berlin, Brussels and Warsaw.

“I think its USP [unique selling point] is this amazing European network that ELNET has built and the leaders, policymakers and thinkers that it can bring together,” says Ryan, who served as a minister in former prime minister Tony Blair’s government.

ELNET’s high-level delegations to Israel, she believes, have a crucial play to part in building support for the Jewish state and a greater understanding of the challenges it faces.

Referring to the mid-May conflict between Israel and Hamas, she says: “It’s always so easy and simple for people to immediately go to this ‘victim-villain’ scenario and make Israel the villain. That’s why taking people to Israel and seeing the situation on the ground — the geography, the threat that Israel faces — is so important, so people can judge for themselves the reality of the situation. Israel is just not judged by the standards that other countries are judged by.”

Ryan, a former chair of Labour Friends of Israel, says the challenge for pro-Israel groups is to change the nature of the debate surrounding the Jewish state in many European countries.

“It’s very hard to have the debate. People have very set positions that seem to be symbolic of their politics,” she says. “We need to really open up the debate and have a much more considered debate rather than [have people] just taking positions that indicate whether you’re left or right.”

But Ryan also believes that Europe — which is often seen as fertile territory for the Boycott, Divestment and Sanctions (BDS) movement — should not be viewed as virulently hostile to Israel.

Trade between Britain and Israel, Ryan notes, is booming. “We are Israel’s third-biggest trading partner — that speaks for itself.”

She warns, however, that, over the long-term, the BDS campaign could become more of threat. “It takes root on campuses and affects, influences and impacts young people, many of whom may well be the leaders of tomorrow,” Ryan says. “It gives them a biased and unbalanced view, and, in my view, it spreads hatred of Israel.”

“People on the hard left try and lead British public opinion down a rabbit hole,” she says. “But there was a recent survey following the Guardian of the Walls conflict that showed that the majority of British people believed that Israel had the right to defend itself.”

Pro-Palestinian activists and supporters burn an Israeli flag as they demonstrate in support of the Palestinian cause outside the Israeli Embassy in central London on May 22, 2021. (Photo by JUSTIN TALLIS / AFP)

The former minister, who strongly supports a two-state solution, continues: “It’s very important for Israel to find peace and the Palestinians deserve peace, too. But Israel is not at war with the Palestinian people. Israel is at war with Hamas and Islamic Jihad terrorists who want to wipe [it] off the face of the map. I think the British public have some understanding of this. I think you underestimate them at your peril.”

Ryan is concerned about the sharp spike in antisemitic attacks in the UK during the recent fighting between Israel and Hamas. Nonetheless, she takes heart from Corbyn’s heavy defeat at the 2019 general election.

“You saw in 2019 a huge rejection of that kind of politics and I felt very encouraged that the British public could see that,” she says. “It wasn’t just a vote for the Conservatives. It was a vote against… the rampant antisemitism in the Labour party – people said it on the doorstep. They said: ‘I can’t vote for that man and those kinds of politics.’”

Ryan became a supporter of Labour Friends of Israel soon after being elected to parliament in 1997. Her support for the Jewish state, she says, stems from the fact that it is “a democracy in a very difficult neighborhood; the only democracy in the Middle East.” She cites its record on rights for women, the LGBTQ community and trade unionists, contrasting that with Israel’s regional neighbors. 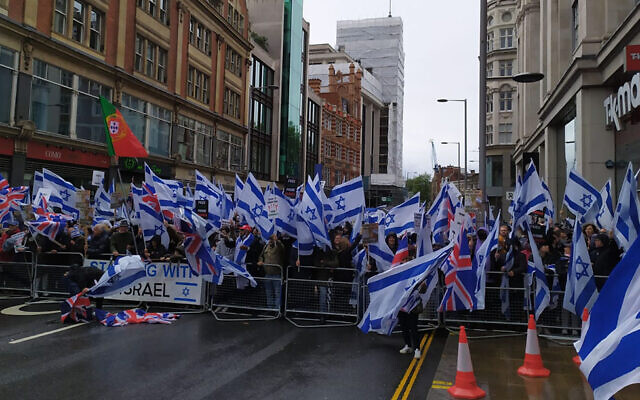 Supporters of Israel demonstrate in London, May 23, 2021. (Courtesy of the Israeli Embassy in the United Kingdom)

But Ryan, who unlike many British politicians happily described herself as a Zionist, says she has also “always believed that the Jewish people have the right to self-determination.”

Before entering parliament, Ryan was a teacher and also worked as an oral historian at London’s Imperial War Museum in the 1980s interviewing Holocaust survivors.

“I interviewed people who… lived in ghettos, were in forced labor camps, went on forced marches, were in camps such as Belsen, Dachau, Auschwitz,” she recalls. “The horror of their experience, and their memories and their loss, stayed with me and I think it gave me a deep understanding and emotional connection to the experience they had had and I think it influenced my thinking, knowing why Israel was so important to the Jewish community.”

Before entering parliament, Ryan was a teacher and also worked as an oral historian at London’s Imperial War Museum

Ryan, who isn’t Jewish, says that her Irish heritage also helped shape her attitude towards antisemitism and racism. Her parents were originally from Ireland and came to Britain in search of a better life.

“Their working lives were really hard, they had manual jobs and they often faced discrimination, so we knew what that looked and felt like,” she says. Her parents, Ryan adds, taught her about “the evil of racism and prejudice.” 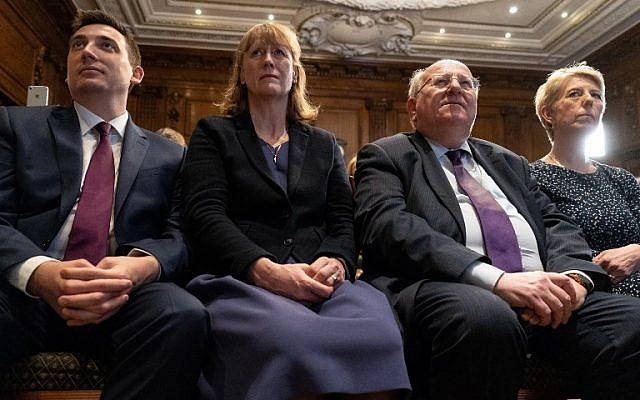 Former Labour Party and now members of The Independent Group of MPs (L-R front row) Gavin Shuker, Joan Ryan, Mike Gapes and Angela Smith listen as they attend a press conference being given by their new colleagues, former Conservative Party and now Independent MPs, Anna Soubry, Heidi Allen and Sarah Wollaston, in central London on February 20, 2019, following their resignation from the Conservative Party in a joint letter. (Niklas HALLE’N / AFP)

The former MP joined the Labour Party in the early 1980s, she says, precisely because of its commitment to equality and its role in the fight against racism. But, when Labour became “infected with anti-Jewish racism” on Corbyn’s watch, Ryan says she “always knew the point would come where I would really have to stand out against this.” She describes the decision to leave her party of 40 years as “heartbreaking,” but adds: “I’m very proud that I did it, I don’t regret it for a minute. I have to be able to look myself in the mirror.”

I have to be able to look myself in the mirror

Ryan was one of a handful of Labour MPs who quit the party over Corbyn’s leadership. Does she believe their stand made a difference?

“I think [we] had a tremendous impact in drawing back a curtain and showing the British public just how bad this was and how terrible it would be to have Jeremy Corbyn walk into [Downing Street],” she says. 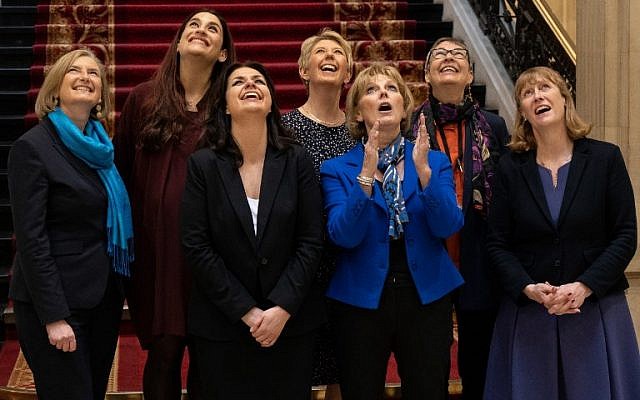 Corbyn was suspended last year from the Parliamentary Labour Party by his successor, Keir Starmer, after suggesting the party’s problems with antisemitism had been overstated. Earlier this month, he provoked new anger by denying that the Jewish former Labour MP Luciana Berger had been hounded out of the party.

Ryan is unsurprised by Corbyn’s comments. “He will never recognize what he did because he is certain that he has the moral high ground,” she says. “He was in a powerful position to stand up to… antisemitism, and instead of which he denies it existed, I think that makes him culpable.”

Ryan believes that Corbyn, who remains a Labour member, should be expelled from the party. She backs the efforts made by Starmer to tackle antisemitism and says his apology to the Jewish community and his response to the report by Britain’s anti-racism watchdog probing Jew-hate in the party were important steps forward.

But, Ryan argues, Labour still needs to root out the hard left and its influence in the party. “I think Keir has got a lot more to do and I think that the public knows it, too,” she says. 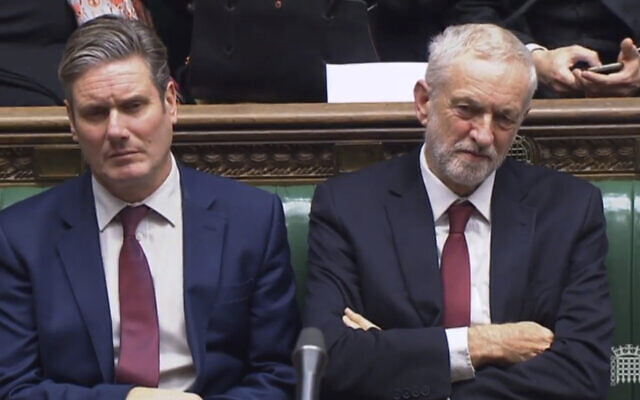 Ryan praises US President Joe Biden for his support for Israel during last month’s conflict with Hamas. She believes, however, that, Labour’s recent past has lessons for the Democratic party, which itself has seen an apparent rise in anti-Israel sentiment and allegations of antisemitism involving some prominent left-wingers within its ranks.

“You have to confront each and every instance of antisemitism and you confront it from the beginning and call it out for what it is,” she says. “By the time Labour became institutionally antisemitic… the infection was there, the damage was done; [it was] too late to root out those Jew-haters.”

Ryan emphasizes the need for “clear red lines that you’re not willing to compromise on” and says confronting antisemitism and anti-Zionism can’t be separated.

“We have to say very clearly that those who single out the world’s only Jewish state for criticism and deny the Jewish people alone the right to self-determination are antisemites, pure and simple. You can’t claim to oppose antisemitism [if] you won’t ever speak up for Israel,” she says.

Ryan’s stand against the hard left in the Labour party was rooted in her belief that fighting antisemitism shouldn’t fall to Jews alone.

“This is an issue for all of us. I’m not Jewish and you don’t have to be Jewish to stand up for Israel… [and] to say antisemitism is wrong,” she says. “I don’t want to live in a world riddled with this kind of hatred; I don’t want my children, my grandchildren to grow up in a world like that. Antisemitism weakens democracy and it corrodes the bonds which hold society together.”


What are your thoughts on the story? Let us know in the comments below!

Inflation: Grocery Prices Could Rise to 14%