NEW YORK — The new Israeli government is seeking to strengthen the Palestinian Authority as it enters a post-Netanyahu era and to bolster its own ties with the Democratic administration in Washington, a senior Israeli official told The Times of Israel on Sunday.

“Our policy is first and foremost to strengthen the Palestinian Authority. Whatever Hamas receives, three times as much should be given to the PA,” said the official, who agreed to speak on condition of anonymity.

The approach being taken by the new unity government led by Prime Minister Naftali Bennett and Foreign Minister Yair Lapid flies in the face of the one maintained during the tenure of ex-premier Benjamin Netanyahu, when relations with the PA hit an all-time low.

But the shift will likely be essential to improving Israel’s relations with the US where the entry of Joe Biden into the White House marks a return to traditional American support for the two-state solution.

The new mindset is at the center of Israel’s policy both in the West Bank where the PA is based and in the Gaza Strip, which is ruled by the Hamas terror group.

Discussing Israel’s position on Gaza reconstruction after the 11-day conflict Israel fought with terror groups there in May, the official acknowledged that Israel has since been engaged in indirect talks with Hamas via Egyptian mediators in Cairo.

While the main players of those talks may be Israel and Hamas, the official said, Jerusalem has been adamant that the negotiation table be expanded.

“We are saying that the PA needs to be part of this equation… because it is the moderate faction,” the official argued.

A Jordanian mobile field hospital passes into Rafah in the southern Gaza Strip, through the Kerem Shalom crossing, the main passage point for goods entering Gaza from Israel, on May 21, 2021, after a ceasefire brokered by Egypt between Israel and the Palestinian Hamas terror group. (SAID KHATIB / AFP)

Israel is hoping this approach will result in Ramallah being tasked with distributing Qatari humanitarian aid in Gaza, the official said, while admitting that the matter is more dependent on approval from Hamas and Qatar.

In an effort to prevent the rearmament of Hamas, Bennett’s government says, it will no longer allow the bimonthly entrance of tens of millions of dollars in cash from Qatar. Instead, it is demanding a third party — such as the PA or the UN — be charged with divvying out the funds in hopes that they will be more closely monitored and won’t be used to bankroll Hamas military operations.

The Israeli position — along with its insistence that larger reconstruction projects for the Strip be conditioned on Hamas’s return of the two fallen IDF soldiers and two Israeli civilians it holds captive — have led to a dead end in the Cairo negotiations, but the official said that a development could still take place overnight.

As for the West Bank, going about strengthening the PA is an easier task for the new Israeli government.

The senior official briefing ToI pointed to the Sunday cabinet decision to increase the number of work permits Israel provides for Palestinians by 15,000. The workers’ incomes are an important source of funding for the Palestinian economy, which has been battered by diminished international aid and a tough pandemic year. 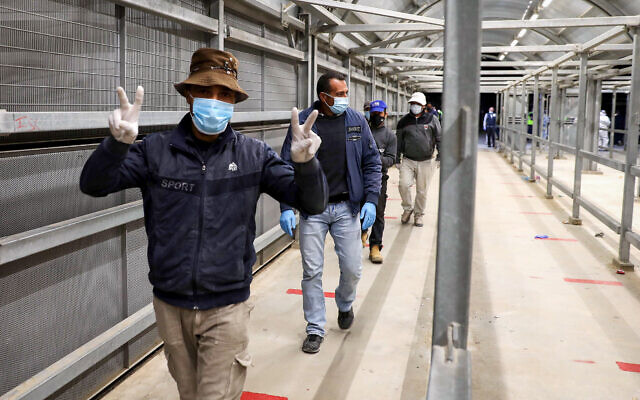 Palestinian workers enter Israel through the Mitar checkpoint in the southern West Bank on May 5, 2020. (Wisam Hashlamoun/Flash90)

“We will try and advance all sorts of economic initiatives with the PA to try and strengthen their institutions as best we can… based on the understanding that this government won’t be able to strike a peace deal [with the Palestinians], but we can… work to ‘shrink the conflict,’” the official said, borrowing a phrase used by Israeli philosopher Micah Goodman, whose centrist political views have been coming to the attention of a growing number of cabinet members.

Pressed for additional examples of how Israel might go about strengthening the PA, the official said Israel is prepared to give PA security forces greater room to operate in the West Bank and will try “to embarrass them less, by limiting as much as possible [IDF] operations that take place in front of PA police stations.”

In June, an IDF arrest operation outside the PA Military Intelligence Unit headquarters in Jenin ended in the deaths of two PA security officers in an exchange of fire with Israeli forces.

Other avenues for bolstering Ramallah being considered include expanding the list of imports Israel allows into the West Bank and authorizing the purchase of additional operational equipment by PA security forces, “such as GPS software,” the official said. “This helps create a reality in which there is better governance in [the West Bank].”

The Defense Ministry is also looking into whether it can authorize Palestinian ID cards for roughly 7,000 undocumented Palestinians living in the West Bank’s Area C, which is under Israeli security and civilian control, the official said. The Oslo Accords of the 1990s made Israel temporarily responsible for approving new IDs for Palestinians in the West Bank, given that the IDF controls all crossings into the territory, but granting identity cards for thousands often stalls due to Israeli security concerns.

The official acknowledged that there are limitations to the new policy goal. Last month, the security cabinet voted to withhold nearly NIS 600 million ($184 million) from the PA to offset funds that Ramallah paid in so-called terror stipends to security prisoners and their families in the past year. 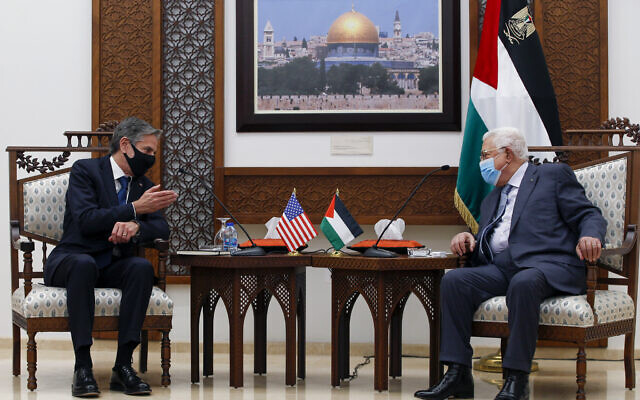 “We delayed the implementation of the [offsetting terrorists’ stipends] law, but in the end we must follow it,” the official said. “The PA said it’s looking at ways to reform their payment policy, so we’re waiting for them to do that.”

And when the government has sought to boost cooperation with the PA, it has not always found a willing partner. Ramallah backed out of an agreement last month to trade a million Israeli coronavirus vaccines in exchange for an equal number of doses to be acquired by the PA at a later date after it was publicized that the Israeli vaccines were slated to expire within weeks, even though Israel was using doses from the batch on its own population.

The Israeli government is also restricted by its unique makeup, with centrist and dovish ministers from the Yesh Atid, Blue and White, Labor and Meretz parties who are interested in reaching a political settlement with the PA holding key roles. On the other hand, they are balanced out by a prime minister from the hawkish Yamina party along with other cabinet members from the right-wing New Hope and Yisrael Beytenu parties who are on record with much less accommodating views toward the PA.

But evidently recognizing that a publicly hardline approach will win him few friends in Washington, Bennett too has begun speaking of his desire to “shrink the conflict” and improve economic conditions for the Palestinians. He has also allowed senior officials to hold no fewer than six phone calls and meetings with their Palestinian counterparts since being sworn into office less than two months ago.

Defense Minister Benny Gantz’s call last month with PA President Mahmoud Abbas was the first official conversation between an Israeli minister and the Palestinian premier since 2017.

Differentiating between the blocs and isolated settlements

The senior official spoke to ToI as Bennett’s senior aides were arriving to Washington to meet with their American counterparts in preparation for the prime minister’s upcoming White House visit.

The new government has been determined to demonstrate that it is capable of improving ties with both parties in the US, and not just with Republicans, who rushed to Israel’s side during the Netanyahu era. 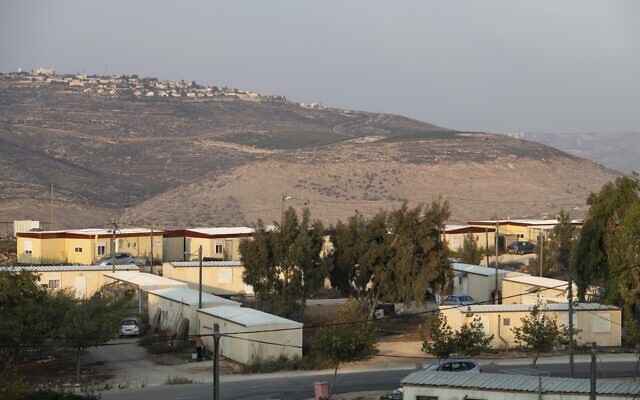 Part of this strategy has included an apparent reset of settlement policy, which went largely unchecked over the last four years when former US president Donald Trump was in office.

The official said that the Civil Administration’s High Planning Subcommittee will be convened “at some point” and the building plans for the settlements will be released in a “smart manner.”

“The policy is to first and foremost grant approvals in towns within the blocs where there is no problem to develop them, while projects beyond the blocs will be approved on an as-needed basis,” the official said, indicating a shift from the previous government, which sought to avoid differentiating between the so-called settlement blocs closer to the Green Line and the more isolated settlements deep in the West Bank.

Netanyahu announced plans to annex all of Israel’s settlements last year but was forced to backtrack when the United Arab Emirates conditioned their normalization agreement with the Jewish state on Jerusalem’s shelving of the controversial plan for the West Bank.

There are ideological differences between Gantz — whose office is in charge of most affairs in the West Bank over which Israel maintains military control — and Bennett, who heads the new government and has historically backed annexation of a majority of the West Bank. 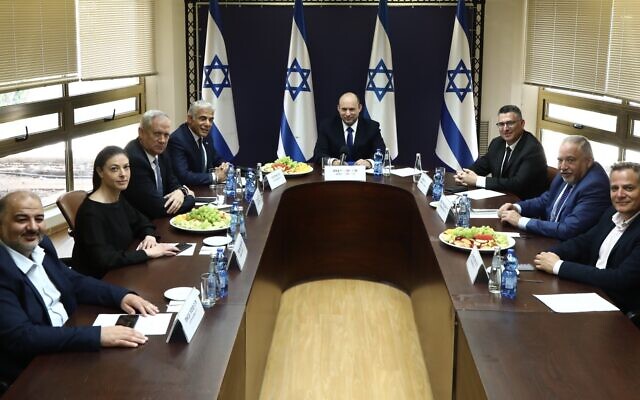 “We’ll have to approve a certain number of projects that on the one hand will allow people to live there and on the other hand don’t cause us diplomatic damage,” the official said, while admitting that it was unclear when the High Planning subcommittee would convene next. “I’m not sure if it’ll take two weeks, a month, or three.”

But following up on the new goal of strengthening the PA, the official, that new approvals for Israeli settlements could well be coupled with building permits for Palestinians in Area C, who have long suffered from a lack of such authorizations.

The official said that the US response to the new Israeli approach has been positive and that the two countries share the objective of bolstering Ramallah, “so we’re working together in order to do that.”