With Israel facing the possibility of a new COVID-19 outbreak as the number of virus cases continues to rise, Health Minister Nitzan Horowitz announced Monday that he was appointing coronavirus czar Nachman Ash as the ministry’s new director-general, citing his success in the pandemic response so far.

“Prof. Nachman Ash comes to the important position of director-general of the Ministry of Health with rich professional and managerial experience. Most importantly,  Ash sees human beings before his eyes, and his considerations are always highly socially sensitive,” Horowitz said in a statement.

“We will fight the coronavirus in a professional, serious and transparent manner, while at the same time strengthening the public health system, reducing the gaps in public health, and placing people at the center,” Horowitz added, saying that both he and Ash “believe that the mission of the Health Ministry is to serve as the flagship of equality and human rights in Israel, and in this spirit we will lead the system.”

A former chief medical officer of the Israel Defense Forces who also served as a director at a leading HMO, Ash thanked Horowitz “for the trust and great privilege to lead the excellent health care system of the State of Israel.”

He said that the Health Ministry “faces a huge challenge in dealing with the coronavirus, along with strengthening the health system across the board.”

Before being appointed coronavirus czar in October last year, Ash was the medical division director at Maccabi Healthcare Services and taught at Ariel University in the West Bank. In addition to his medical qualifications, he has a graduate degree in Medical Informatics from a joint program of Harvard and MIT, as well as a master’s degree in political science.

On Sunday, Chezy Levy announced that he was resigning from his position as Health Ministry director-general ahead of Horowitz’s expected appointment of a new ministry head. A ministry’s director-general is usually a personal appointment, and Levy was himself appointed by previous minister Yuli Edelstein when the latter assumed the office last year. 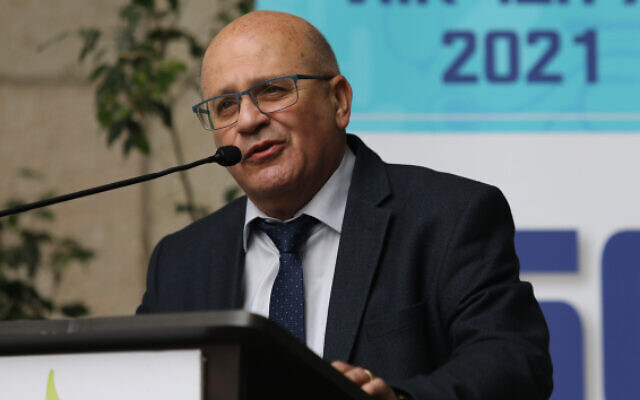 Horowitz on Monday thanked Levy for his “exceptional dedication, humanity and professionalism… during one of the most challenging periods known to the health system in Israel.”

The changing of the guard at the Health Ministry, which comes two weeks after Horovitz was sworn in as the new minister, comes amid fresh fears of a resurgent COVID-19 as a result of the highly contagious Delta variant that is spreading around the world.

There have been a total of 840,888 confirmed cases in Israel, and 6,429 deaths from the virus since the pandemic began. 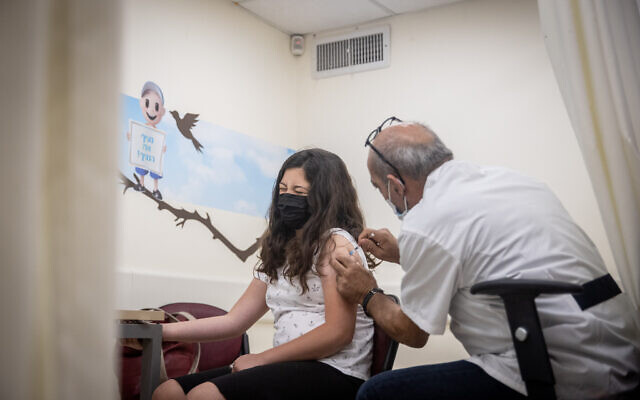 An Israeli girl receives a COVID-19 vaccine injection at a Clalit vaccination center in Jerusalem on June 24, 2021. (Yonatan Sindel/Flash90)

In a statement Monday morning, Prime Minister Naftali Bennett made a particular appeal to teenagers to get vaccinated.

“At the moment, there are enough vaccines for everyone. However, there is a catch. Their validity is due to expire soon and then we will not have enough vaccines on hand for everybody. There is a short 11-day window and we are in a race against time,” Bennett said. “The last date on which it will be possible to get vaccinated with the first dose is July 9; three weeks later you will receive the second dose and then the vaccines we have in stock will reach their expiry date.”

Earlier this month, the Palestinian Authority agreed to but then later rejected a deal for Israel to hand over its soon-to-expire vaccines in exchange for the PA’s shipment of fresh Pfizer vaccines, which are scheduled to arrive later in 2021.

Ran Saar, head of the Maccabi Health Services HMO, told Army Radio Monday morning that children aged 12-15 were proving the hardest age group to reach but that the health provider hopes to immunize 50% of those eligible within nine days.

More than 30% of 12- to 15-year-olds have been vaccinated or made an appointment to receive their first shot, Ido Hadari, executive director at the HMO, told Channel 12 News on Sunday. “We believe that we can reach 50% soon,” he added.

The Delta variant of the virus, first identified in India, is more contagious than other variants and may be better able to bypass vaccines, but apparently does not cause serious infection. The transmissibility of the Delta variant over the original strain is around 40%, according to the United Kingdom’s Public Health agency. The effectiveness of two vaccine doses for protection from hospitalization is at 96%, according to the agency.

Meeting Sunday evening for the first time since a new government was sworn in, the renewed coronavirus cabinet discussed increased testing and enforcement on Israel’s borders and a boosted effort to vaccinate teens — but did not add any major new restrictions, after the indoor mask mandate was reintroduced on Friday.

The coronavirus cabinet decided to move toward stricter measures at Israel’s main gateway to the world, Ben Gurion Airport, and to apply tougher sanctions against travelers breaking quarantine. 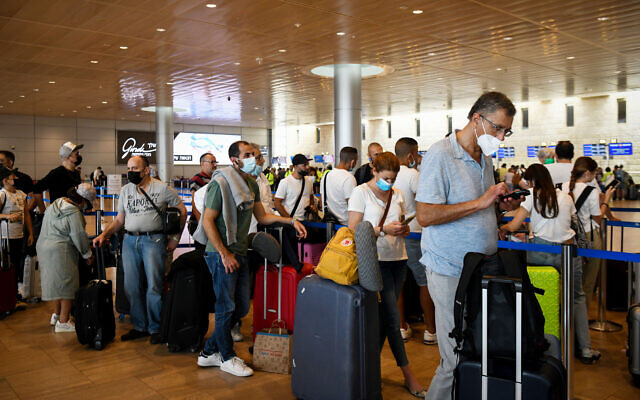 Masked travelers in the departures hall at Ben Gurion Airport on June 23, 2021. (Flash90)

They also reportedly weighed a handful of new measures, including mandating a third negative COVID test for those returning from abroad, the return of electronic tracking bracelets for those who require quarantine, and the reopening of COVID testing sites run by Magen David Adom.

The cabinet decided that in addition to handling the Delta variant, better infrastructure must be developed to prepare for future COVID mutations or other viruses.

In addition, the cabinet decided to conduct full genetic sequencing of COVID variants detected in anyone arriving in Israel.

Earlier on Sunday, ministers in the full cabinet decided that anyone who travels to countries currently forbidden due to their high COVID morbidity rates will be fined NIS 5,000 ($1,500).

Flight canceled due to pilot shortage