The mother of a border guard critically wounded at the Gaza fence on Saturday night laid the blame for the incident squarely on the government’s shoulders.

“My son is fighting for his life, his blood, his breath, for nothing,” Nitza Shmueli, the mother of 21-year-old Border Police officer Barel Hadaria Shmueli, told 103 FM Radio on Monday morning. “The country isn’t worth it, and I’m not getting any answers. A 12-year-old terrorist shoots him point blank, and all this knowing that our fighters were not allowed to shoot and respond. Why did they send my son? Why? I want an answer.”

Shmueli was wounded as rioters surged toward the security fence. In videos from the scene, rioters could be seen attempting to destroy and then snatch a soldier’s gun as it poked through a hole in the concrete wall. One man could then be seen running up to the wall, taking out a gun that had been tucked in his waistband and firing three shots through the hole at point-blank range. One of the rounds struck Shmueli in the head.

Nitza said Monday morning that her son was still in critical condition and fighting for his life.

“He is not well. We need a lot of prayers, I’m asking and begging people to pray that our Barel will get back on his feet, will return to his family, to life,” said Nitza.

The Soroka Medical Center in Beersheba said Monday morning that Shmueli was still in serious condition, unconscious and intubated, after undergoing a series of surgeries on Sunday.

Palestinians during a demonstration by the border fence with Israel, east of Gaza City on August 21, 2021. (Photo by SAID KHATIB / AFP)

Nitza slammed Prime Minister Naftali Bennett and IDF Chief of Staff Aviv Kochavi for not visiting her son in the hospital.

“Oh, sorry. How is he doing?” Bennett then asked, according to Nitza. “The prime minister has to call and ask how he’s doing? Where are you? Where? Where is the chief of staff?!”

Nitza told the radio station that she was much more comforted by a call she received later than night from opposition leader Benjamin Netanyahu, the former prime minister, who is currently vacationing in the United States.

“Benjamin Netanyahu called at midnight, with questions and well wishes. He cried on the phone — he cried,” she recalled. “He knew every detail, asked about his surgeries. Mr. Bennett didn’t even know his name, asked which hospital he was in. What an embarrassment.”

On Monday morning, Bennett tweeted that he had spoken with Barel’s father and understood the family’s pain and anger.

“I spoke last night with the father of the wounded fighter, Barel Hadaria Shmueli,” wrote Bennett, “and I sent prayers in the name of all the people of Israel for the recovery of their hero son. I understand the family’s pain and I am in pain alongside them.”

Bennett said the incident is currently being investigated, “and lessons will be learned and the findings will be presented to me soon.” The prime minister reiterated comments he made on Sunday in response to the shooting: “We will settle the score with anyone who harms our fighters and civilians.” 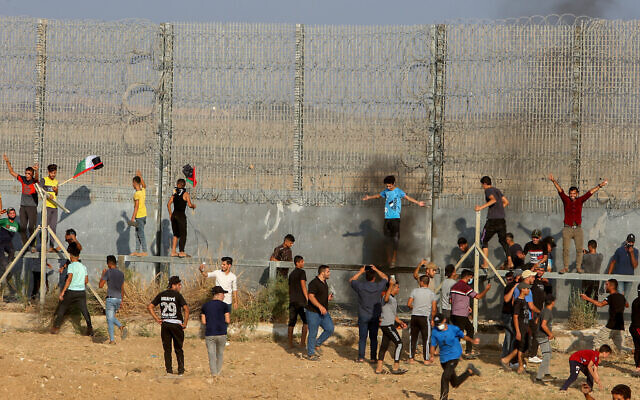 Palestinians clash with Israeli troops during a protest at the Israel-Gaza border, east of Gaza City, on August 21, 2021. (Abed Rahim Khatib/Flash90)

Initial findings from the military’s investigation into the violence along the Gaza border on Saturday indicated that the troops were unprepared for the sudden rush of rioters toward the security fence. The soldiers stationed on the border did not immediately open fire at the masses that suddenly attacked the fence, out of concern that they might hit civilians who were in the area, a military official said.

Shmueli’s father criticized the military on Sunday for the “error” that allowed rioters to get so close to the fence and open fire on him.

“I ask only that he lives, no more than that,” the father, Yossi, said. “Let all the people of Israel pray for his recovery.”

The IDF has yet to complete a full probe of Saturday’s events, and is looking into all aspects of the day, from how troops were deployed along the border to the exact lead-up to the shooting, and how the forces responded to it, said the military official, adding that the IDF saw the incident as a grave violation of Israeli sovereignty.

Though the IDF prepared for Saturday’s border protest — deploying additional troops to the security fence — it had incorrectly predicted that the demonstration would be far less violent, in light of Hamas’s public statements to that effect ahead of time, the probe found.

The section of concrete wall where the attack happened was specifically built following a series of regular riots along the Gaza border in 2018. However, it only works as a proper defensive position when rioters are a good distance away. Snipers can fire at potential threats through the small opening, while being protected from enemy sniper fire and other attacks.

If rioters get close to the wall, however, the Israeli soldiers on the other side effectively lose all visibility and are left open to attack, as appears to have occurred on Saturday, according to the military’s initial findings. 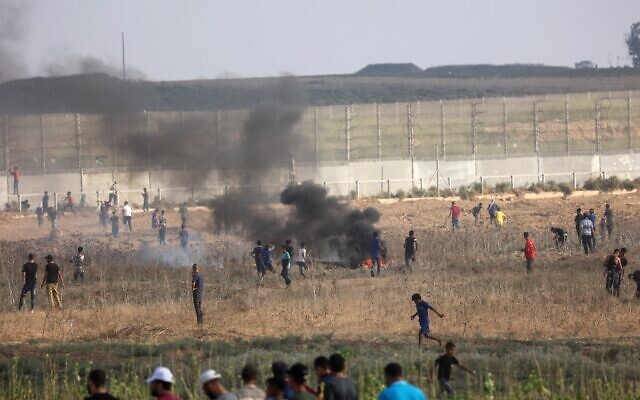 According to the official, the rioters ran up to the border so quickly that Shmueli and the other soldiers with him apparently did not know how close they were until they reached the wall itself, despite the ample reconnaissance equipment on the border, including drones and powerful surveillance cameras.

The military does not yet know why the soldiers on the border were not informed in time about the approaching rioters or what action should have been taken to stop them.

The military was also investigating the way Shmueli was taken to the hospital, a process that took 51 minutes from the shooting. He was taken to Soroka Medical Center in an ambulance, not a helicopter, as this was deemed the faster option, according to the official.

In response to the shooting, as well as the general violence on the border, the Israeli Air Force struck four Hamas sites in the Gaza Strip late Saturday.

Section 230: Must be Repealed to protect the Freedom of Speech