DOHA, Qatar (AFP) — The Taliban had barely completed their takeover of the Afghan capital Kabul when the local affiliate of the Islamic State group struck, sowing mayhem with a bloody airport attack.

It was a symbolic strike for the jihadist organization, highlighting its longevity and sparking concern in the West.

More than 100 Afghan civilians and 13 US servicemen were killed in the August 26 attack on Kabul airport — the deadliest violence against US forces in Afghanistan since 2011, shattering morale and complicating evacuation efforts.

It was also the bloodiest attack against the US claimed by an IS group affiliate, namely the Islamic State in Khorasan (IS-K), coming at an acutely sensitive moment for the withdrawing forces.

It coincided as well with the beginning of the trial of those accused of orchestrating the November 13, 2015, attacks on Paris claimed by IS which resulted in 130 deaths.

The bloody carnage in the French capital marked the peak of the group’s so-called “caliphate,” which straddled Iraq and Syria between 2014 and 2019.

In this image provided by the US Air Force, flag-draped transfer cases line the inside of a transport plane Sunday, Aug. 29, 2021, prior to a dignified transfer at Dover Air Force Base, Del. The fallen service members were killed while supporting non-combat operations in Kabul, Afghanistan. (Jason Minto/US Air Force via AP)

At the end of the week, the world will also mark the 20th anniversary of the September 11, 2001, attacks which were the largest terror attacks on the West in recent times, claimed by the IS group’s rival Al-Qaeda.

The resurgence of IS in Afghanistan now looks set to inspire radical jihadists of all stripes.

“Western intelligence agencies should already be on high alert given the upcoming anniversary of the 9/11 attacks, always a period for inspired attacks, and the Taliban’s victory in Afghanistan,” Katherine Zimmerman, an analyst at the American Enterprise Institute in Washington, told AFP. “Jihadists have already called for more attacks on the West.”

Since the collapse of the so-called caliphate following a multinational military assault, the jihadist threat has shifted considerably with IS now probably lacking the capacity to strike in the heart of Europe as in 2015, analysts told AFP.

But the group’s reach has continued to be felt through affiliates in Yemen, Nigeria and Mali among others which continue to plot attacks, while remaining hyperactive on social media, drawing in followers.

Western intelligence agencies from Langley to Whitehall to Auckland have proved unable to eradicate the threat of lone wolf attackers, radicalized online, who strike with improvised weapons such as knives or vehicles. 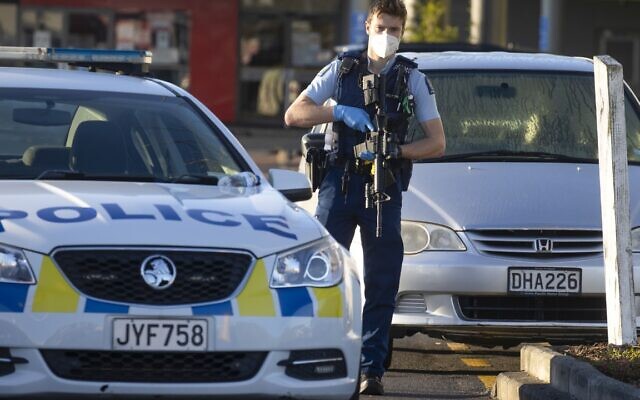 As recently as Friday, a Sri Lankan attacker who had been known to police since 2016 and had IS propaganda at his home, injured seven people in Auckland, New Zealand.

The IS attack on Kabul airport was all the more shocking because it succeeded despite US President Joe Biden’s specific prior warning that intelligence agencies were aware of the plot.

“Washington’s inability to prevent an attack that was so publicly announced has allowed IS-K to amplify its bloody effectiveness,” said Jean-Pierre Filiu, a professor at Paris’s Institute of Political Studies. “The face-to-face confrontation of American troops and the Taliban opened a gap in security which the jihadist commandos could exploit.”

IS sympathizers were quick to capitalize on the attack and its aftermath.

IS-K has become the fourth most active Islamic State group affiliate globally since the start of the year, according to an expert on the organization known on Twitter only as Mr Q.

The Kabul attack “propelled IS-K into the political and media spotlight,” he told AFP. 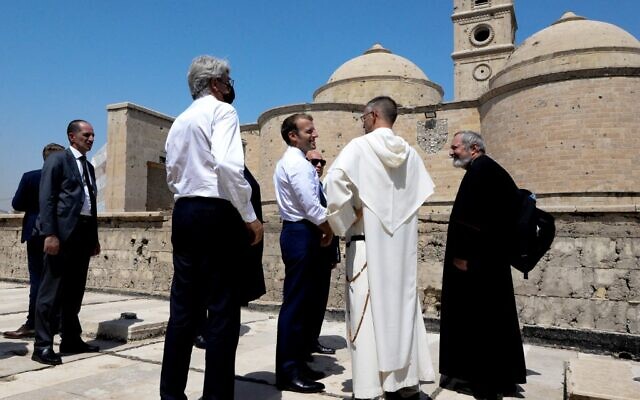 French President Emmanuel Macron (C) tours the Our Lady of the Hour Church in Iraq’s second city of Mosul, in the northern Nineveh province, on August 29, 2021. (Zaid AL-OBEIDI / AFP)

Former US diplomat James Jeffrey said that IS began training jihadists for similar attacks outside Iraq and Syria, and possibly beyond the Middle East, between 2019 and 2020.

“Certainly there is at least some risk of a repeat of attacks in Europe organized by ISIS and, as always, attacks by individuals inspired by ISIS,” added Jeffrey who served as special envoy to the international military intervention against IS.

Western governments are now warning against complacency. During a visit to Iraq at the end of August, French President Emmanuel Macron called for nations threatened by IS to “not lower our guard, because Daesh (IS) remains a threat.”

Following the attack on US forces in Kabul, and after US forces killed just three IS fighters, Biden pointedly told the group: “We are not done with you.”

Analyst Zimmerman warned that, left unchecked, “it’s not hard to imagine how the terror threat could grow in Afghanistan and spill over into the region and even the West.”

Migrant deaths hit new high in 2022,Will Biden ever visit the...

Corrupt US Employers and Smugglers Are Exploiting Migrant Teens for Profit

Migrant deaths hit new high in 2022,Will Biden ever visit the...

Opinion August 7, 2022
The title of the page
Go to mobile version