NEW YORK — The French mission to the United Nations circulated a draft resolution to members of the Security Council on Tuesday that calls for a ceasefire between Israel and Gaza terror groups, as countries on the top UN body continued their efforts to weigh in on the ongoing violence despite US objections.

“The three countries agreed on three simple elements: The shooting must stop, the time has come for a ceasefire and the UN Security Council must take up the issue,” the Elysee Palace said in a statement.

In addition to demanding an immediate end to the violence, the core of the resolution’s text stresses the urgent need for humanitarian assistance to Gaza, a Security Council diplomat told The Times of Israel.

Axios reported that the French move surprised the US mission, which has three times in the past week blocked joint statements with similar messaging, insisting that such measures would not help advance a ceasefire and that it wanted time for its own efforts to play out.

A Security Council resolution carries more weight than a joint statement, and blocking one backed by every other member would require the US to issue a veto — something it likely wants to avoid as Biden has vowed to take a more multilateral approach to diplomacy and improve ties with longtime allies that were damaged by his predecessor Donald Trump.

French President Emanuel Macron, left, welcomes Egyptian President Abdel Fattah el-Sissi before attending a video conference with Jordan’s King Abdullah II to work on a concrete proposal for a ceasefire and a possible path to discussions between Israel and the Gaza Strip terror groups, at the Elysee Palace in Paris, May 18, 2021. (Sarah Meyssonnier/Pool via AP)

While Biden “expressed his support for a ceasefire” during a phone call with Prime Minister Benjamin Netanyahu, a source familiar with the matter said no deadline was demanded from the Israeli premier for when IDF operations in Gaza must conclude. However, the president did warn that he would not be able to hold off pressure from within his party and in the international community for an immediate ceasefire for much longer and urged Netanyahu to bring the fighting to a close.

The French resolution includes rhetoric and messaging similar to what has been heard from Biden on the matter in recent days in an effort to make it more difficult for the US to explain why it won’t back the measure, the Security Council diplomat said.

The original draft of the statement does not make mention of Hamas rocket fire but the diplomat said such amendments could be added by other members in the coming days.

“The strategy is to convince all parties, so the text should be very focused and acceptable to everyone,” the diplomat said, adding that a date for when the resolution will be brought before the Security Council has not yet been set. “We will try to move as soon as possible,” the diplomat said.

“The issue is concerning for everyone, and members cannot be silent on the issue,” the diplomat said, noting that Biden himself has backed a ceasefire and that the US should therefore be comfortable getting behind the measure.

Israel has opposed such efforts, and its Ambassador to the UN Gilad Erdan on Sunday urged members to “unequivocally condemn Hamas,” rather than call on both sides to exercise restraint. The Israeli mission asked the US to oppose the joint statements introduced over the past week.

Macron had on Monday underlined the importance of Egyptian mediation after talks in Paris with Sissi. 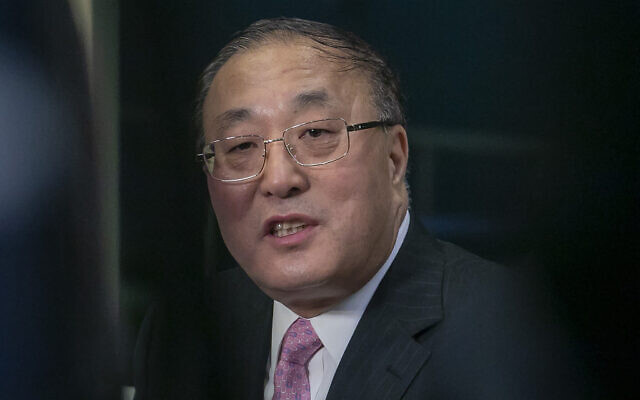 China’s UN Ambassador Zhang Jun said that during a closed-door meeting, members “heard the proposal made by our French colleague in the Council and for China, definitely, we are supportive to all effort facilitating the ending of the crisis and the coming back of peace in the Middle East.”

The UN Security Council had held an emergency meeting earlier Tuesday on the situation in Gaza that ended without any result, four diplomats involved told The Times of Israel.

The closed-door session was the fourth in nine days held by the top UN body and came a day after the US blocked a joint statement calling for a ceasefire for the third consecutive time.

While the Norwegian, Chinese and Tunisian missions that initiated Tuesday’s meeting did so to increase international pressure for a ceasefire, two Security Council diplomats told The Times of Israel they weren’t really sure why another consultation was held, given that member states knew the US position had not moved in the previous 24 hours.

Norway’s UN mission has continued to call for the council to “speak with one voice” on the escalation in Gaza, but with the US insistent on pursuing its own avenues in order to bring about a ceasefire, the top UN body has been placed in a “wait and see mode” for the time being, one diplomat said. 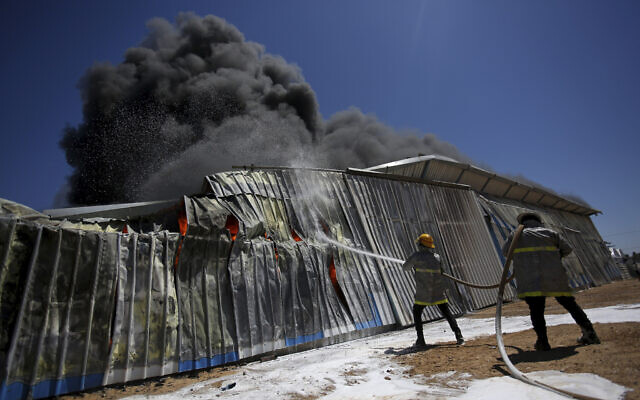 Palestinian firefighters work to extinguish a fire at a paint factory after it was hit by an Israeli airstrike, in Rafah, Gaza Strip, May 18, 2021. (Yousef Masoud/AP)

On Thursday, the UN General Assembly will be meeting for the first time on the same topic and a majority of countries are expected to voice solidarity with the Palestinians, call for a ceasefire and criticize Israel. There is not yet an expectation that the meeting will include an effort to pass a resolution on the matter, diplomats said.

Twelve people in Israel, including a 5-year-old boy and a 16-year-old girl, have been killed in the rocket fire from Gaza, and hundreds have been injured.

According to Gaza’s Hamas-run Health Ministry, at least 212 Palestinians have been killed so far in the nine days of the conflict, including more than 60 children. It was not immediately clear if this ministry tally included all of those killed or if there were Hamas operatives not included in the count. According to the IDF, more than 120 of those killed were members of Hamas and over 25 were members of the Palestinian Islamic Jihad as of Monday night.

Olaf Scholz:Germany finally has a government ready to lead Europe