Bundesliga teams Bayern Munich and FC Cologne have committed to give €100,000 ($118,053) to an organization assisting the flood victims. The total sum will be split among the two teams, along with Bayern Munich sponsor Deutsche Telekom.

Bayern Munich CEO Oliver Kahn said the donation is only a “first step” and that further assistance is planned.

The partners will give a check to the Aktion Lichtblicke e.V organization on Saturday, before the two clubs play a test match in the city of Villingen.

The floodwaters have caused a dam in the western German state of North Rhine-Westphalia to break, forcing residents in the city of Wassenberg to leave the area.

About 700 residents in the Ophoven neighborhood of Wassenberg are being evacuated by rescuers due to the dam failure. The dam lies along the Rur river.

The neighborhoods of Effeld and Steinkirchen, which have a combined total population of almost 1,600 people, could also be impacted by the dam failure. Residents of those neighborhoods have not yet been evacuated.

The office of German President Frank-Walter Steinmeier has announced he will visit the flooded regions of North Rhine-Westphalia on Saturday together with regional head Armin Laschet (CDU) who is in the running to replace Angela Merkel as chancellor in the fall.

Trucks and cars stuck on a flooded street in Erftstadt

Steinmeier will be briefed on the current situation and the relief efforts in Erfstadt near the river Rhine. On Friday, he expressed his condolences to those suffering as a result of the floods.

“In the hour of need, our country stands together,” he said.

One-tenth of the city of Venlo in the Netherlands on the German border is in the process of evacuating to avoid having to do so at night, according to the municipality. The order effects 10,000 people in 7,100 homes.

According to Dutch public broadcaster NOS, the evacuation order has been scaled back from earlier when authorities believed 16,000 in the city of 100,000 would need to leave.

Authorities asked that people shut off their gas and electric before fleeing their homes.

At a press conference at the VieCuri hospital in Venlo, officials said they were planning to evacuate 200 patients out of an abundance of caution.

While asserting the hospital faced a low risk of being flooded, Venlo officials acknowledged the Meuse River was reaching higher levels faster than expected.

“You don’t want to see the images afterwards of nurses having to be sailed back to the hospital in boats to care for patients. That’s the horror scenario we want to avoid,” board chairman IJsbrand Schouten said.

You can read more on the situation in the Netherlands and Belgium here.

The Munich Re Group’s chief climate and geoscientist Ernst Rauch acknowledged the challenges to the insurance industry in particular posed by climate change in a statement released via the insurer’s Twitter account.

“There are clear indications that part of the growing damage cannot be explained solely by socio-economic factors but is due to climate change,” Rauch said.

Rauch added, “We have to assume that these damages will increase in frequency and intensity.”

He called for more investment in flood prevention, saying how “in the long run, the expected increased damages are much more expensive than if we start now with prevention.”

The German Football League (DFL) and German Football Federation (DFB) announced Friday the creation of a €3 million ($3.5 million) fund to support survivors of the devastating floods that have brought havoc to western Germany.

A joint statement read in part, “Our thoughts go with the relatives of the deceased, the injured and the many people in need”.

The DFB said it was also in contact with European football’s governing body, UEFA, which had signaled a willingness to help as well.

Defense Ministry spokesman Arne Collatz said the German military had deployed some 850 troops in affected areas, but the number is “rising significantly because the need is growing.”

He added that the ministry had triggered a “military disaster alarm,” a technical move that essentially decentralizes decisions on using equipment to commanders on the ground. That means that military personnel were authorized to decide — on their own — how to assist in local clean-up and rescue efforts.

More than 200 soldiers were already deployed in nine districts and cities in Rhineland-Palatinate, although the actual numbers were higher as not all vehicle crews were counted.

“We have not yet reached the stage where we can say that the situation is easing,” Dreyer said. “In the meantime, the assessment of all of us is that the damage is so dramatic and enormous that we will have to deal with this issue for a long time to come,” she added.

“The floods have literally pulled the rug out from under [people’s] feet,” Laschet said.

Officials in both states fear that the number of victims will continue to rise as the situation remains to difficult to assess. 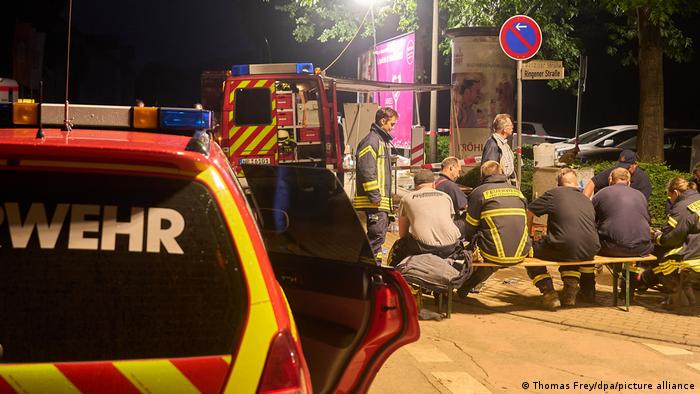 Some 1,300 people remain unaccounted for

Rescue workers assess the damage in Bad Neuenahr as 1,300 people remain unaccounted for, possibly due to mobile networks being down. More than 1,000 emergency service employees have been deployed in the region, including the fire brigade, police and armed forces. 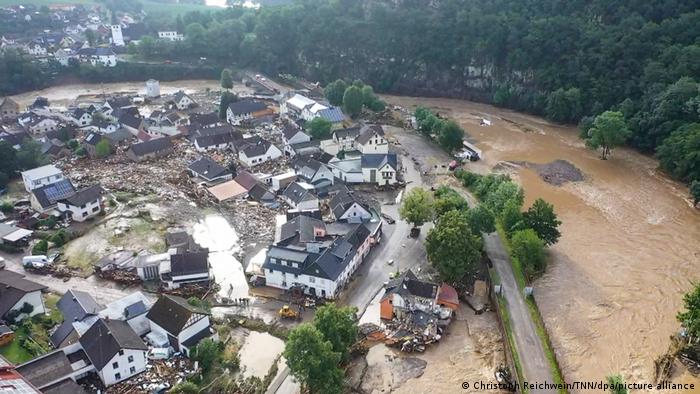 At least 18 people died in the Bad Neuenahr-Ahrweiler region and about 50 were trapped on the roofs of their houses awaiting rescue, police said. At least six houses had collapsed overnight in the village of Schuld. “Many people have been reported missing to us,” police said. Schuld is located in the Eifel, a region of rolling hills and small valleys southwest of Cologne. 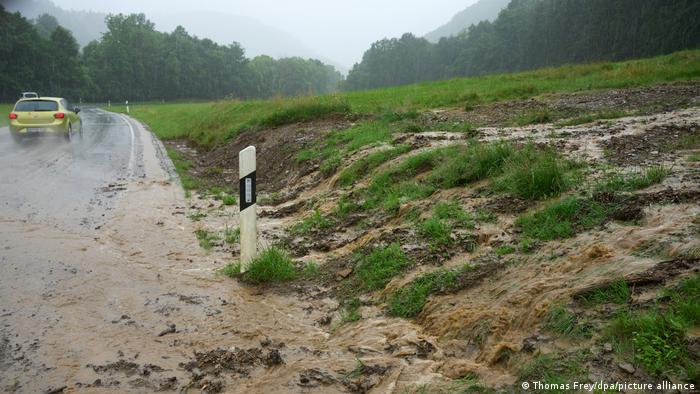 Car traffic was limited in several parts of western Germany, as roads flooded and were blocked off. Meanwhile, rail connections were suspended in large parts of North Rhine-Westphalia, Germany’s most populous state. State Premier Armin Laschet, who is running to succeed Angela Merkel as chancellor in this fall’s German election, visited the flood-hit region. 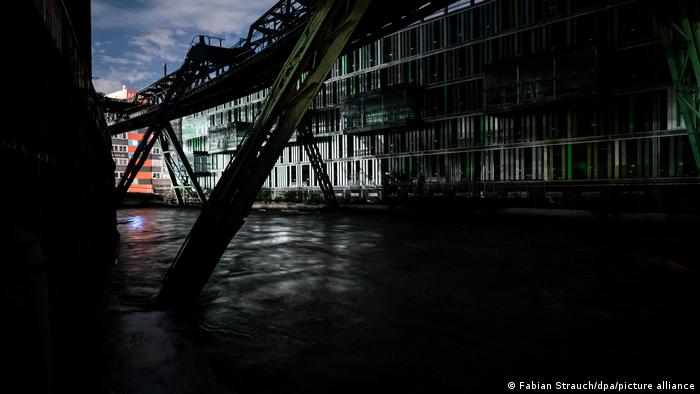 One fireman drowned on Wednesday during a rescue mission in the western German town of Altena and another died following rescue operations at a power plant in Werdohl-Elverlingsen. 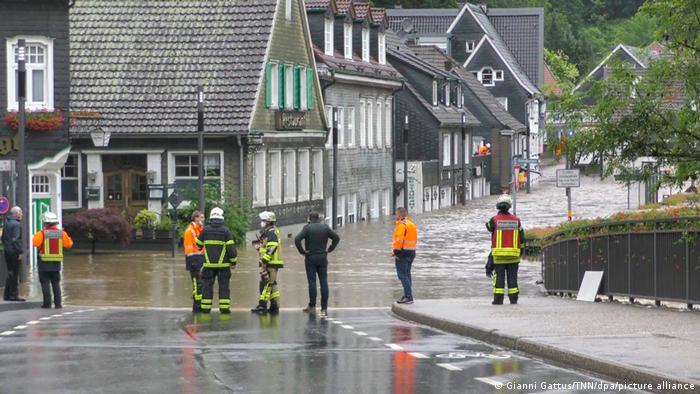 Rescue operations made difficult without service 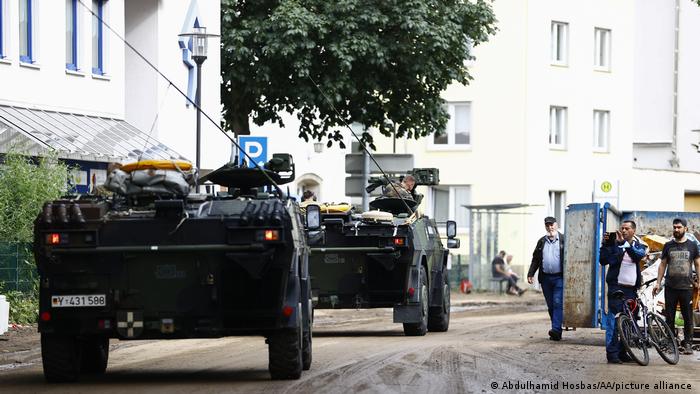 German President Frank-Walter Steinmeier said climate action was needed to prevent such catastrophes in the future.

“Only if we take up the fight against climate change decisively, we will be able to prevent extreme weather conditions such as those we are experiencing,” Steinmeier said.

Steinmeier’s remarks echoed German politicians, including the ministers of interior and environment, who have called for more action to fight climate change.

The president also announced that he would travel to the areas of western Germany that were devastated by the floods.

“It is a tragedy that so many people have lost their lives,” he said during an address at the Bellevue Palace in Berlin. “My thoughts are with them; their fate strikes me to the heart.”

The North Rhine-Westphalia Interior Ministry said on Friday that at least 43 died in the flooding.

Meanwhile, more than 90 people died in the district of Ahrweiler alone, Koblenz police said. Officials fear that that toll will continue to rise, as electricity and telephone service are still inaccessible across the region, and several roads are still blocked by floodwaters.

Several houses have collapsed in Erftstadt, south of Cologne, and rescue crews were struggling to help residents who had returned to their houses despite the warnings, officials said on Friday.

Several people were missing, while a gas leak was further hampering rescue workers as they tried to reach stranded people by boat, the Cologne district government said. 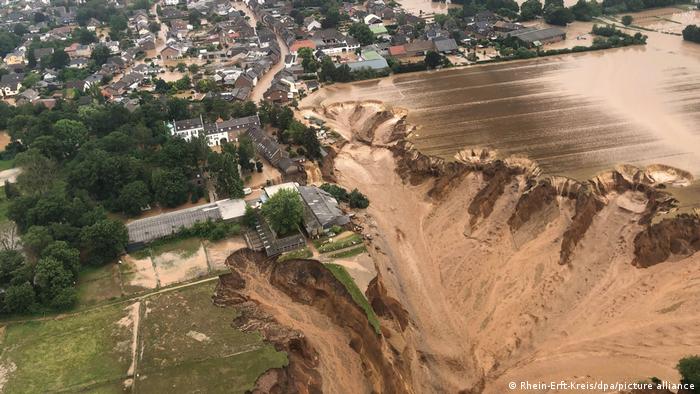 A spokesman for the district government of Cologne said 55 people have been rescued from affected houses, while 15 were still trapped in their homes.

The Bundeswehr is stepping in with vehicles to help rescue the trapped people, the spokesperson said.

He appealed to residents who had been evacuated not to return to their homes. “Returning is life-threatening,” he said.

Although the heavy rains stopped, Belgians were nervously watching as the river Meuse continued to rise and threatened to overflow.

Around 10 houses partially or fully collapsed in Pepinster near the eastern city of Liege, where the Meuse flows. 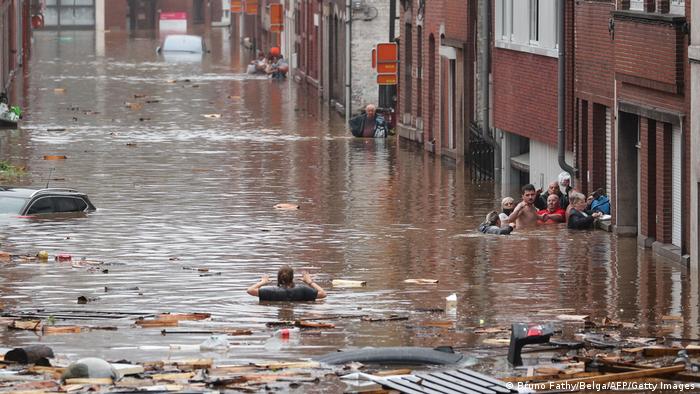 In Belgium, several towns and villages were submerged

German Health Minister Jens Spahn said his counterparts from Portugal and Slovenia expressed their condolences during a meeting in Ljubljana.

“It is important for the local people to know that they are not alone in difficult times. It is also good to know that Europe stands together,” Spahn said.

Defense Minister Annegret Kramp-Karrenbauer said the main focus for the German military, the Bundeswehr, will be assisting the emergency response.

“I have already ordered that all other assignments that are not directly related to the missions abroad be put on hold,” Kramp-Karrenbauer said on Friday.

“The Bundeswehr is already providing active help with emergency response and clearing work with its quickly available on-site forces,” she added. 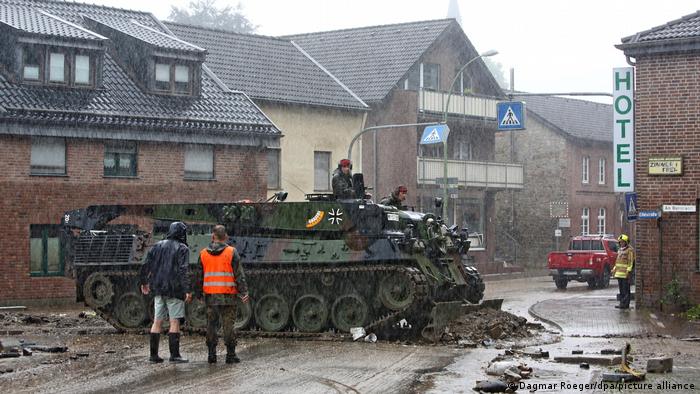 The latest from DW on the ground

DW correspondent Giulia Saudelli said the damage in Walporzheim district in Rhineland-Palatinate was “astounding,” with streets and houses filled with mud and debris.

On Friday morning, Walporzheim was a “ghost town” as a lot of people fled the extreme rains. But those who stayed were starting to overcome the initial shock and assess the damage that the flooding left behind, she said.

One resident who owns property in the town told Saudelli that the damage, in his case, amounts for millions of euros. “Imagine multiplying that for thousands of people,” Saudelli said.

Rhineland-Palatinate’s state premier, Malu Dreyer, told public broadcaster ZDF that the extent of damage in her state was inconceivable.

“The suffering keeps increasing,” Dreyer said Friday. “Our state has never seen anything like it.”

Lewentz also doubted that the 1,300 people that were reportedly unaccounted for were all missing. “However, yesterday was also a day when it was very difficult to get an overview. People fled their buildings,” he said. 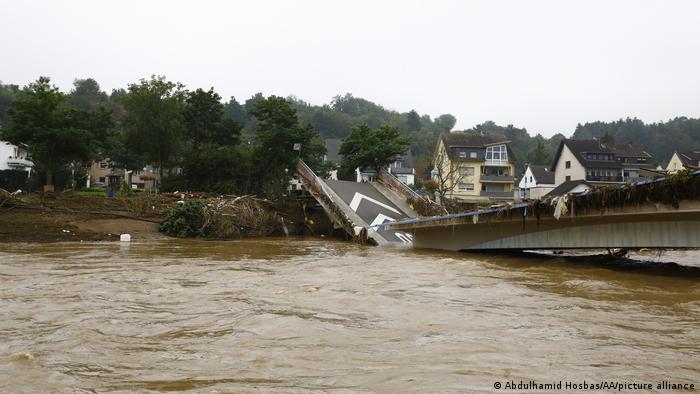 Police in Koblenz stressed that people should not go to affected areas to search for their relatives or belongings. “You put yourself in danger and, possibly, hinder the rescue measures,” police said on Twitter.

There were still more than 1,300 people unaccounted for in the Ahrweiler region, possibly due to mobile networks being down.

The North Rhine-Westphalia state Cabinet holds an emergency meeting Friday to discuss financial aid to those affected by the flooding, as well as the costs to repair the destruction.

North Rhine-Westphalia state premier, Armin Laschet, on Thursday visited the town of Hagen, which had been heavily impacted by the flooding.

“We will stand by the towns and people who’ve been affected,” Laschet told reporters.

Rhineland-Palatinate has already provided €50 million ($59 million) as short-term support to repair damage to roads, bridges and other structures.

Chancellor Angela Merkel has also promised aid to those affected.


What are your thoughts on the story? Let us know in the comments below!

Why People Don’t Trust the Science

McCarthy: would be hard not to hit Pelosi with a Gavel...

Second Amendment December 5, 2022
The title of the page
Go to mobile version